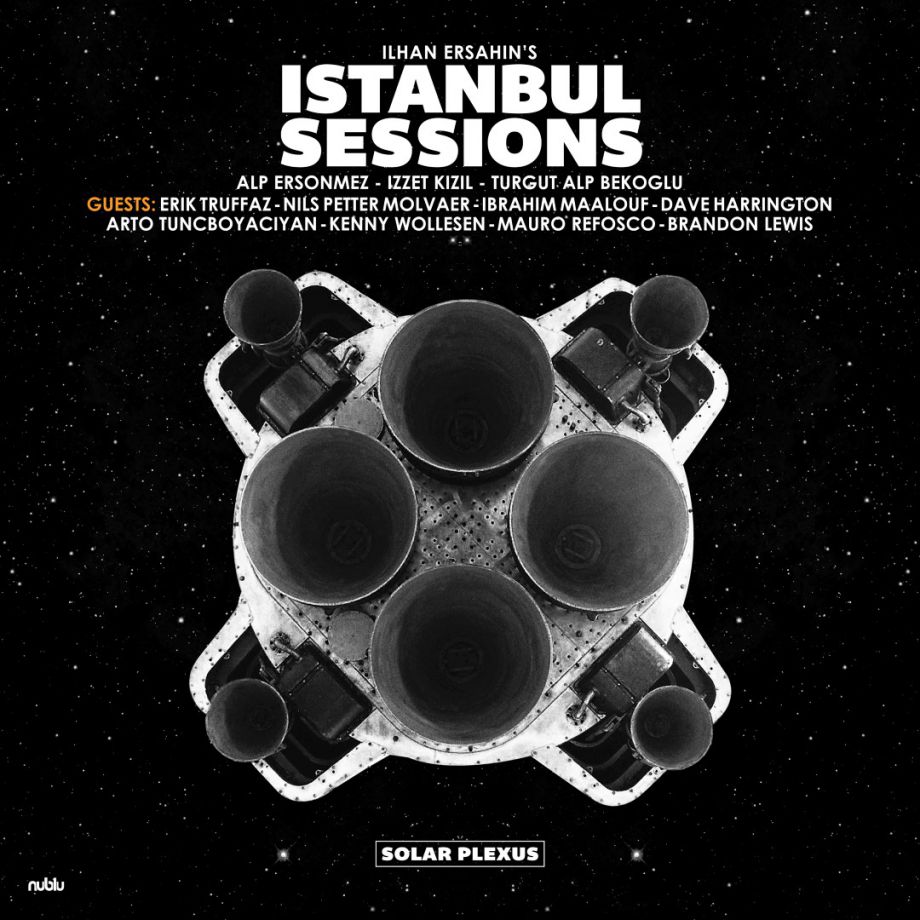 Ilhan Ersahin’s ISTANBUL SESSIONS – Solar Plexus
featuring Erik Truffaz,  Dave Harrington,  Nils Peter Molvaer, Ibrahim Maalouf, Mauro Refosco, Brandon Lewis,  Arto Tuncboyaciyan und Kenny Wollesen
Ilhan Ersahin has become an integral part of the New York jazz scene. In 1990 the Swede with Turkish roots went to the city on the Hudson to study saxophone. Today he owns the club Nublu in the East Village, which is known far beyond the city limits, and is a musician in numerous ensembles.
His latest release “Solar Plexus” is a recording from his famous Istanbul sessions, for which he once again brought renowned jazz musicians into the studio and created cinema for the ears with them. Deep in the now, fresh, cinematic and yet always slightly enraptured. A journey to the sun without leaving the earth – together with Erik Truffaz, Dave Harrington, Nils Peter Molvaer, Ibrahim Maalouf, Mauro Refosco, Brandon Lewis, Arto Tuncboyaciyan and Kenny Wollesen and produced by Dave Harrington and Ilhan Ersahin himself.
We live in strange times, and everything seems to change faster and faster. Ilhan Ersahin’s Istanbul Sessions offers us to linger in the now – instead of getting tangled up in the past or even brooding towards the future. With its irrepressible creative power, the album “Solar Plexus” manages to remain surprisingly accessible and captivating despite many a musical venture. The album earns the title “cinematic” not only through the song titles inspired by films like 2001 or Blade Runner, but also and above all through the music itself, which is projected like a film onto (or better: into) the ears of its listeners.
Frontman Ilhan Ersahin is a well-known figure on the underground scene in New York City. With his club and the record label of the same name, Nublu, he has helped to carry the unique energy of this city and its music scene to the rest of the world. You can see him jamming with the Red Hot Chili Peppers in Sao Paolo, performing with Bugge Wesseltoft in Tokyo’s Blue Note club, or playing oriental sets with Turkish folk musicians in elegant concert halls in Europe.
Since 2008, Istanbul Sessions has set stages on fire around the world. From New York to Istanbul, from Paris to Sao Paolo, from London to Skopje. Their electrifying, cross-genre performances raise questions: Is this really jazz? Doesn’t it sound more like a rock band? Where does their sound come from?
What is certain is that we are listening to musical skill at the very highest level, where the often clichéd idea of the “crossover between East and West” unfolds its true power.
French trumpeter Erik Truffaz was already a guest on their debut album in 2009. “Night Rider”, the second album from 2012, presents the sound of the project at the interface between dance music and free jazz, spiced with a pinch of ethnic influences. The third album, “Istanbul Underground”, was a perfect representation of the nightlife in the never sleeping metropolis of Istanbul.
The now released fourth studio album, “Solar Plexus”, co-produced by Dave Harrington, the second half of “Darkside” alongside Nicolas Jaar, and welcoming Arto Tuncboyaciyan, Nils-Petter Molvær, Mauro Refosco, Kenny Wollesen, Erik Truffaz and Brandon Lewis as special guests, promises to take the music of the 21st century in new directions where no boundaries or conventions can limit the power of creativity.