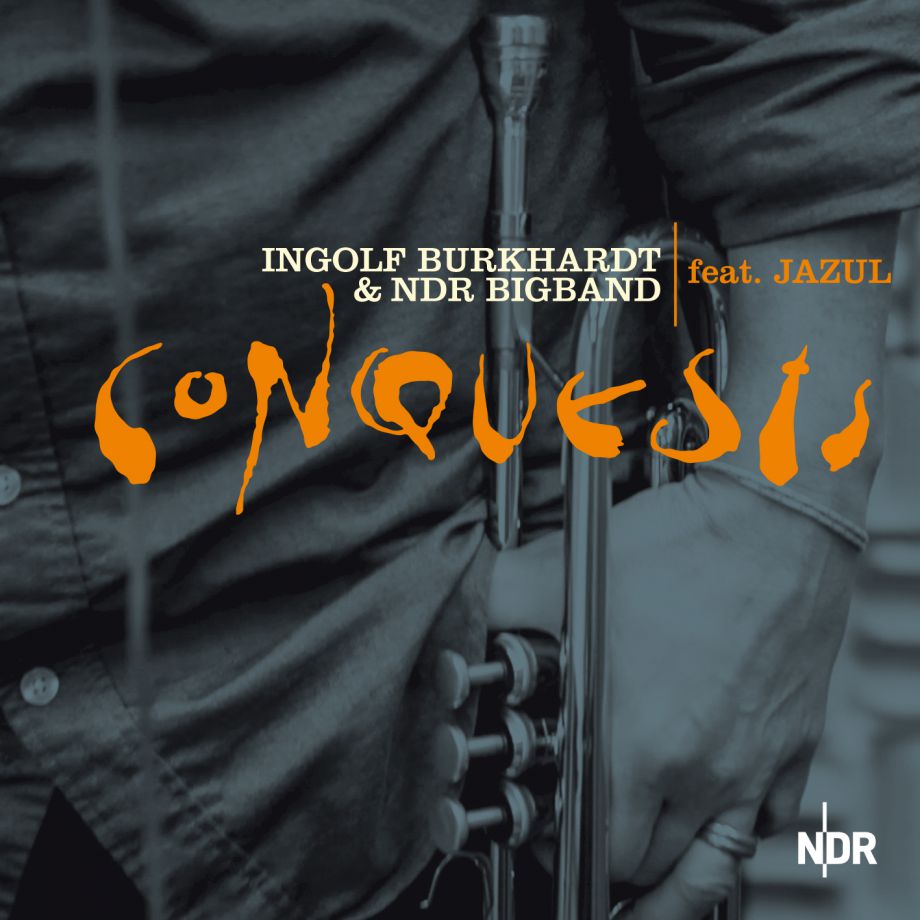 “It’s not what you think it is“… or is it? What’s certain though is that the program of this album is remarkable: Trumpeter Ingolf Burkhardt plays the hits of Joe Sample and the Crusaders! But not alone, as he is backed by both, his Groove-Band JAZUL as well as the NDR Bigband. This Bigband –  of which Burkhardt has been an integral part since 1990 – considers itself an “Orchestra of Soloists” – a collective body of sound whose members are among the most high-profile voices in the European and international Jazz scene.

When this renowned Jazz-Orchestra strikes up Samples’ world-famous classics of Groove, it promises a very special listening experience. And yet, this connection is anything but implausible. Starting with Ingolf Burkhardt who’s now the longest-serving jazzman in the NDR Bigband: His roots as a trumpeter lie in R&B, Funk and Soul, he says: “In my first bands we covered bands like Earth, Wind & Fire and Chicago, also “Skunk Funk” by the Brecker Brothers. I knew the music by “Phoenix Horns” by heart before I even knew who Miles Davis was…” This is where Burkhardt bursts out laughing – given the fact that only a couple of years later in 1985, he shared a stage with the legendary trumpeter at Berliner Jazztage. Back then, Burkhardt was part of the brass section in the Manfred Schoof Bigband before Davis entered the stage with his own band.

Put it where you want it

For Pianist Joe Sample, Jazz was inextricably linked to Funk and Groove, too. When he formed a band with Wilton Felder (ts) and Wayne Henderson (tb) in 1960, they called themselves “Jazz Crusaders” – referring to Art Blakey’s famous “Jazz Messengers”. After ten years (and 18 records!) they shortened their name to “Crusaders” but let their funky HardBop remain the foundation of their R&B Sounds. „It was never my intention to write Top40 hits“ Joe Sample said in 2012. „I like it when people dance. I always listened to Motown- and Rock ‚n‘ Roll hits. But I’m really not a writer of pop songs. I only write things that are meaningful to me.“ Nevertheless, the Crusaders‘ first record was listed in no less than three Billboard-Charts („Jazz“, „Black Music“ and „Pop“), not least because of their hit “Put it where you want it”. And “Street life” became a long-runner in the Top40.
Joe Sample always remained faithful to Jazz: He played piano on records by stars such as Stanley Turrentine and Miles Davis, was in demand as a composer and gained experience as a Bigband-arranger. „I was in New York Midtown one afternoon in the 70s”, Sample recalls. „when all of a sudden, someone shouts out behind me: „Hey, Sample! Where’s my music? You promised you would write something for me!“ It turned out to be Buddy Rich (1917-1987), I had arranged two pieces for his Bigband once…” The next Bigband Joe Sample wrote for – and this is where we’ve come full circle – was the NDR Bigband, the Bigband he went on to realise “Children of the Sun”, a suite about the history of afro-American slaves in the Carribean, in 2011. Samples was very attached to this programme which was later released as an album, and went on tour with the NDR Bigband several times.

“I’m a big Crusaders fan, always have been!”, Ingolf Burkhardt says – despite the fact that there’s no trumpet in the original Crusaders lineup. After his lifelong admiration, Burkhardt finally met Joe Sample when both musicians worked for the NDR Bigband, and was shocked when Sampled died on September 12, 2014. Shortly after, when Burkhardt was about to present his own concert programme in celebration of his 25th anniversary of his collaboration with the NDR Bigband, Burkhardt knew: “Let’s play his music!” With a trumpet! As a leading instrument. “I picked out 5 or 6 songs that I liked: “Spiral” for instance, and of course “Street Life”. That’s a given when you play Joe Sample. A great piece!”
Jörg-Achim Keller, head conductor of the NDR Bigband, re-arranged the songs and found the right grooves for his Bigband and the featured soloists. “When Jörg Achim Keller writes for me I can be certain that it suits me”, Ingolf Burkhard proudly says. “He’s a drummer himself: He knows how to groove, even with such a big band.” And Burkhardt’s delighted to be able to show himself at his best on this new album: As a soloist in this progressive Jazz orchestra – and also as a songwriter, composer and frontman of his own Funk/Groove quintet Jazul which is in charge of the grooves on “Chain Reaction”. Ingolf Burkhardt and Jazul contributed half the tracklist to the record, among others the flugelhorn ballad “Miss You, Man”, Burkardt’s private salute to Joe Sample.
We miss Joe Sample – Ingolf Burkhardt keeps his grooves alive.