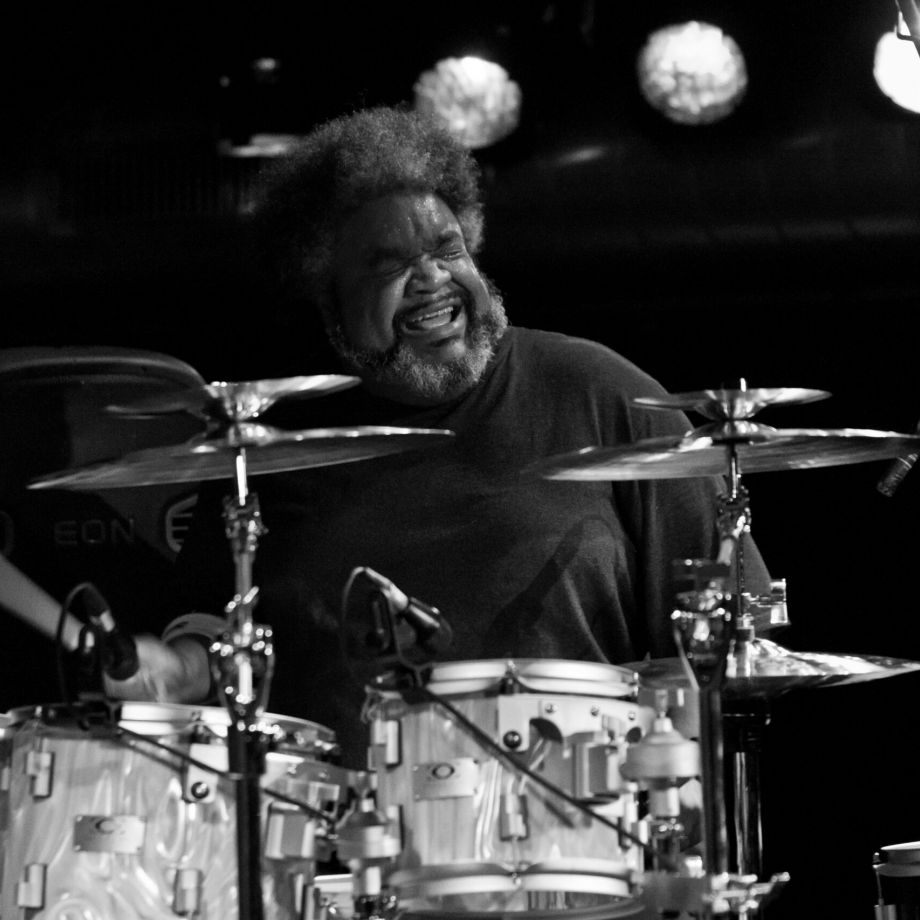 Poogie Bell from Pittsburgh has been the drummer of choice for the elite in fusion jazz, neo-soul, R&B or hip-hop for decades and has performed with many artists on the great stages of the world! He is known as the longtime groovemaster of bassist Marcus Miller and virtuoso sideman of artists like Stanley Clarke or David Sandborn.

With his own project, the Poogie Bell Band, he combines many elements – strings, soul voices, profound lyrics and influences from gospel, jazz, Afro-Cuban and fusion.

It all began in 1961 in Pittsburgh, the city of steel. This is where Poogie Bell spent his childhood. His father Charles Bell was a jazz pianist who graduated from the Carnegie Institute and then formed his own band “the Charles Bell Contemporary Jazz Quartet”. Charles was hired by the Pittsburgh Symphony Orchestra to write a three-part jazz symphony, which received the title “Concerto in Miniature of Jazz Quartet and Orchestra”. Performances were conducted by William Steinberg in 1963 and following this success, the Charles Bell Quartet released albums on Columbia and Atlantic and toured the world in the 1960s.
When Poogie was about 10 months old, he watched from a child’s chair during one of his father’s rehearsals. The next day his mother was woken up at five o’clock in the morning by the sound of a drum kit. At first she thought the drummer of the band had arrived earlier, but she found Poogie sitting at the drums, listening to the sound of the cymbals. Poogie made his concert debut at the age of two and a half during a concert by his father’s band at Carnegie Hall in Pittsburgh. With Pearl Bailey, he then appeared on television for the first time at the tender age of eight at the 1966 Mike Douglas Show.

Poogie’s family moved to New York where his father had accepted a professor of music. There he met Max Roach and Ornette Coleman, often jamming with the family at home. Bassist Paul Chambers was his neighbor.

Poogie began his professional career  with Tom Brown, Weldon Irvine and later Hugh Masakela. He then went on tour with the pioneer of hip-hop, Afrika Bambaata and the Soulsonic Force. A traditional R&B drummer, Poogie also toured with Freddie Jackson, Phyllis Hyman and Chaka Khan. In 1987, he worked with Force MDs, a temptation-style band that was one of the first to incorporate R&B and hip-hop into their music. Poogie wrote and produced the title song of Force MD’s hit album “Touch and Go”. For the next 25 years he worked with many renowned jazz, hip-hop and R&B musicians, including Marcus Miller, Stanley Clarke, Keith Sweat, SWV, New Edition and Erykah Badu.

“Suga Top” is the slang name for a “black” district in Pittsburgh. Hill District, as it’s officially known, is on one of the hills that dominate the cityscape of the former “steel town” in the USA. It is one of these Afro-American communities with their middleclass population which can still be found in many US cities. Poogie Bell was born in Suga Top in 1961. Growing up in the atmosphere of this district in Pittsburgh was to have a formative influence on the young Poogie: with the cohesion of the neighbourhood, with its culture in general and the music in particular, that can be heard and experienced there everywhere; mainly gospel and soul, both of which are practically identity-forming for the people in Hill District, but also Soul, Funk and above all Jazz – his father Charles Bell was an outstanding Jazz pianist. In short: the drummer Poogie Bell is firmly rooted in Suga Top.

“Authenticity” – that is the key word that runs like the proverbial red thread through the entire career of the drummer Poogie Bell. Whether that be in the various bands of the bass guitarist Marcus Miller, for whose ingenious Jazz fusion Bell had provided the percussion for almost 20 years, or in the “super group” SMW with Stanley Clarke, Marcus Miller und Victor Wooten, whose soloist flights on the bass guitar were grounded by Bell with casual elegance and a reduced style.

For Poogie, however, who, over the course of a long career as side man with, among others, Tom Browne, Chaka Khan, David Sanborn, Keith Sweat and, above all, Erika Badu, helped to codetermine the course of “black” Jazz and Pop music from the USA, two unusual cooperations stand out in particular: one with the South African trumpeter Hugh Masekela, with whom he toured South Africa along with Miriam Makeba, also known as “Mama Africa”, and one with the singer Angélique Kidjo from Benin in West Africa. These experiences brought him as an Afro-American musician even closer to the polyrhythms of Africa.

It’s not really enough to listen to Poogie Bell’s new CD “Suga Top” – his fifth album as leader – under the heading of mere “biography”. The 15 tracks represent, rather, the quintessence of Poogie’s career to date with all the ingredients of Funk and Soul, Blues and Pop, combined with the spirit of Jazz. But above all, Poogie digs deep into his own (family) history.

As the album title suggests, Poogie Bell, who moved back to the city of his birth with his family in 2001, is taking a look back at all that he learned and experienced as a small boy in Pittsburgh’s Hill District – but through the “spectacles” of a 52-year-old Afro-American musician. This is why a subtle gospel phrase often opens itself to Soul music, or a strong backbeat groove flows into the Blues.

The band, of course, makes a major contribution towards the authentic atmosphere of “Suga Top”. On the one hand, because most of the participating musicians – Bobby Sparks on keyboards for example, or the saxophonists Chris Hemmingway and Keith Anderson and the acclaimed Jazz trumpeter Michael “Patches” Stewart – all look back on a more or less concrete Gospel background. On the other hand, because Poogie deliberately intended to take the spirit of an Afro-American community into the studio: with the similar experiences they had as black US citizens and as musicians.

That is the only way that the highly expressive song material on “Suga Top” can be played. Usually there was just a simple basic idea – sometimes a catchy melodic phrase or a plucked-out groove, and then again a brief harmonious reverse – over which the musicians jammed during the recording. With this the band initiated a creative production process at the end of which the finished song is created- for example “One Love” or “Greasy Chicken”, a kind of “intuitive” paraphrase of D’Angelo’s hit “Chicken Grease”. And last but by no means least, the singers that Poogie Bell invited to take part in the production of “Suga Top”. In particular Mey, who, as a Bulgarian-born vocalist (sic!), is immersed in the traditions of Afro-American Pop and Jazz music.

“Suga Top” is, however, also a kind of “Manifesto of Groove”. Because this rhythmic phenomenon is not just some myth that cannot be explained let alone played. For Poogie Bell, grooving certainly presents no problems.  “With the bass drum I follow the quarter notes from the bass that I can usually only feel, to create a basis for the music,” he explains. “As soon as the link is created between bass drum and bass, you can use the left and right hand on the drum more variably. If, for example, in the tandem of bass drum/bass the right hand hits the cymbal before the beat and the left hand is “laid back” playing the snare drum, then the music suddenly begins to breathe and to level.” This is the “miracle” that is manifested in “Suga Top”. 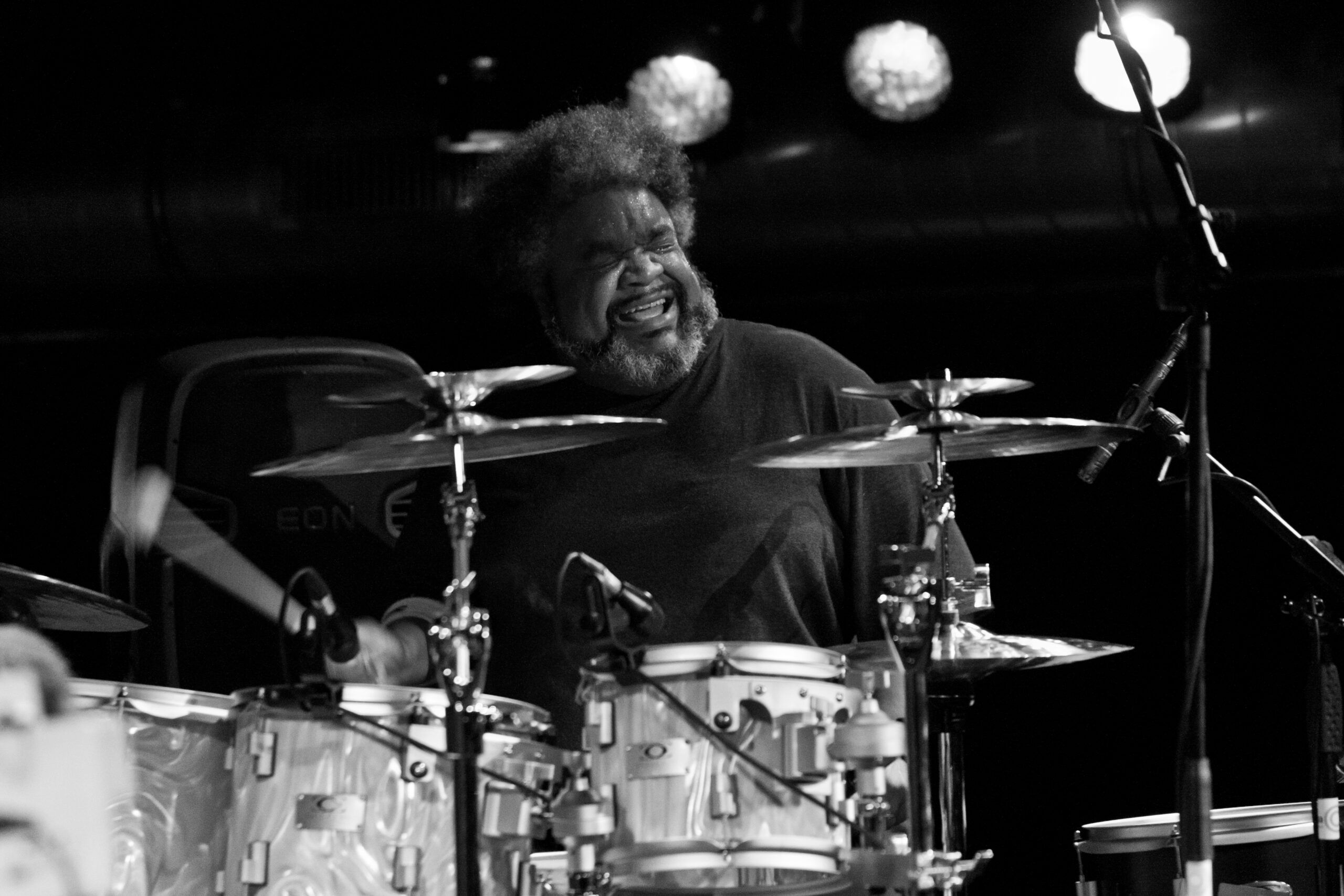 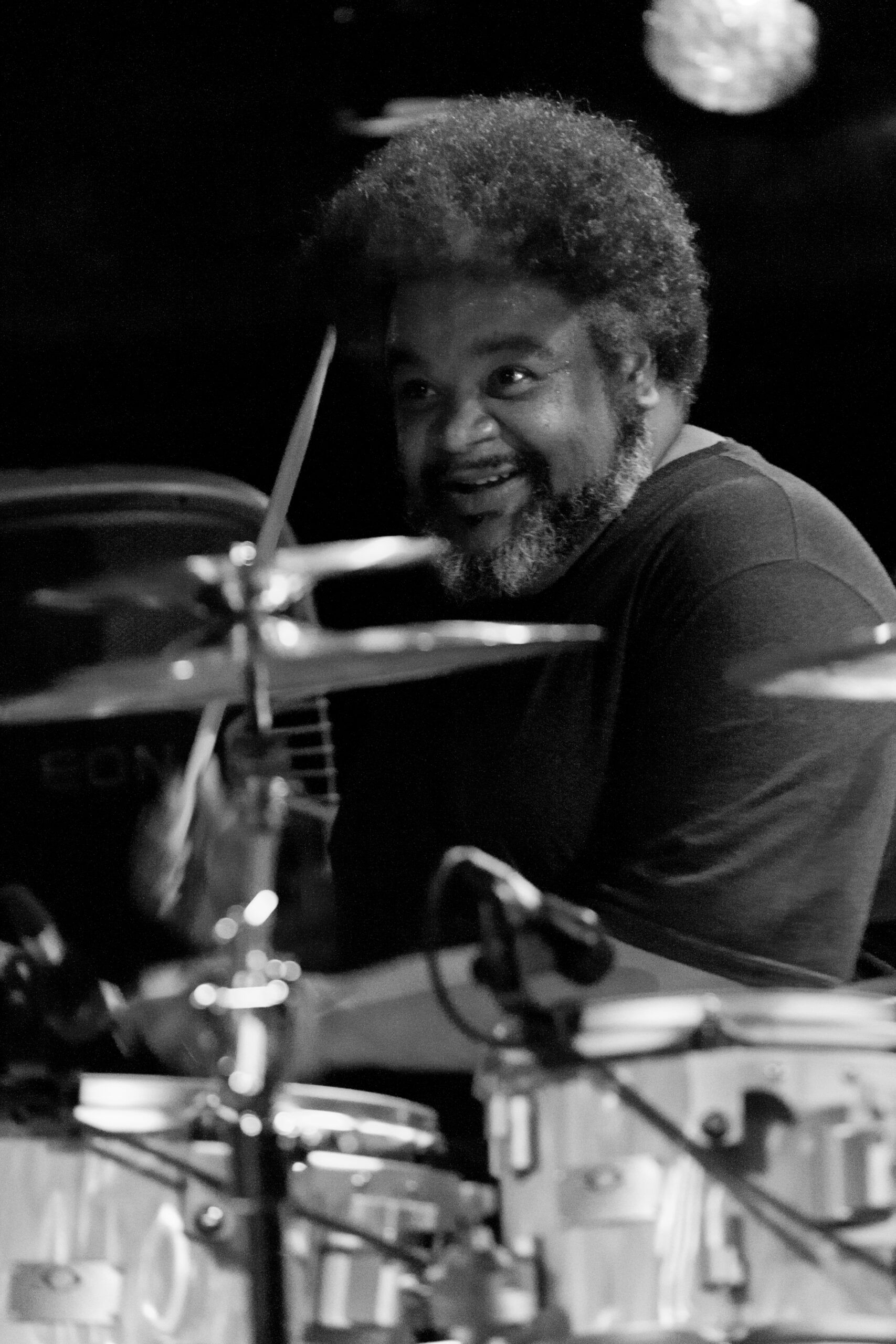 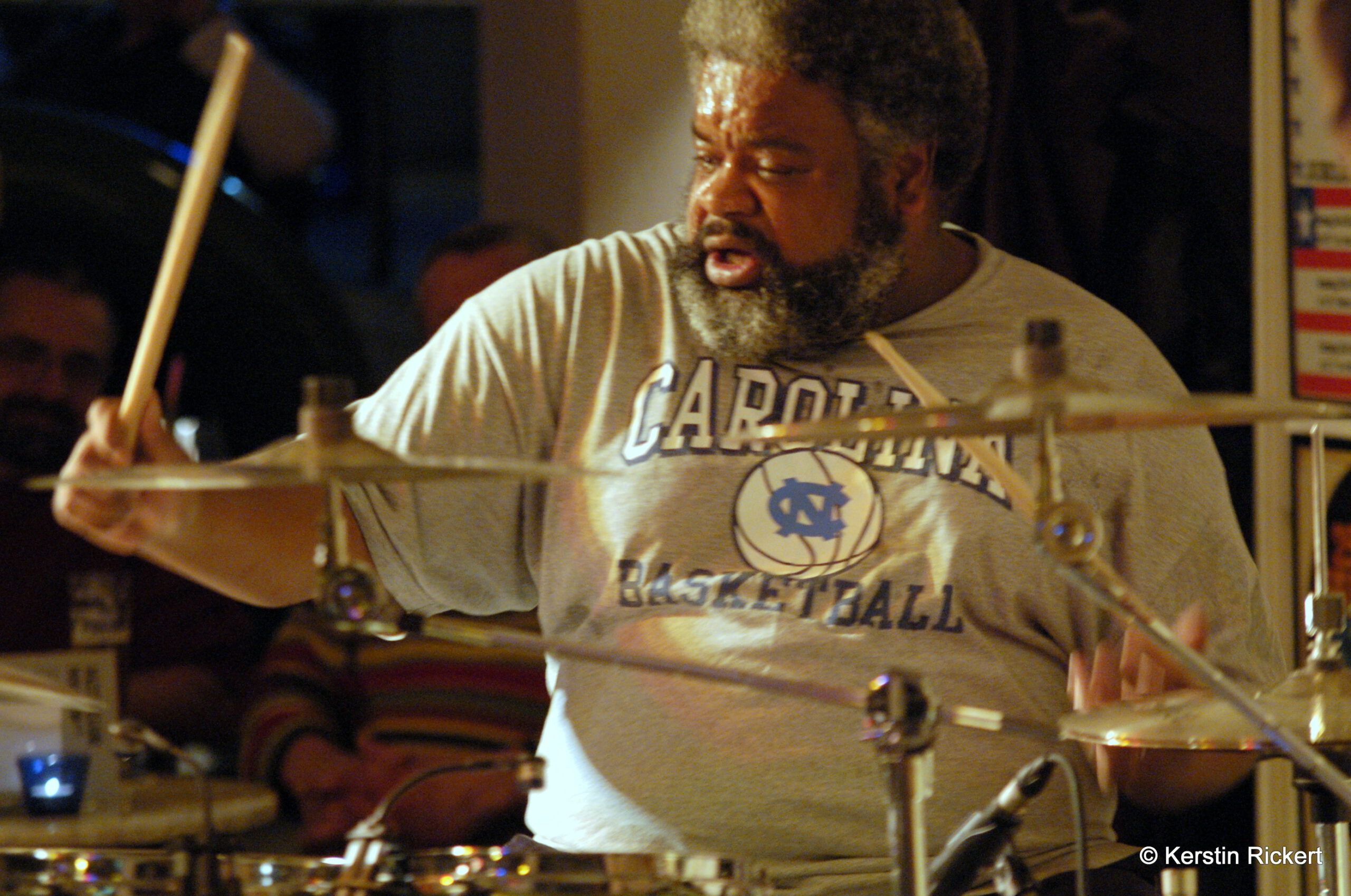 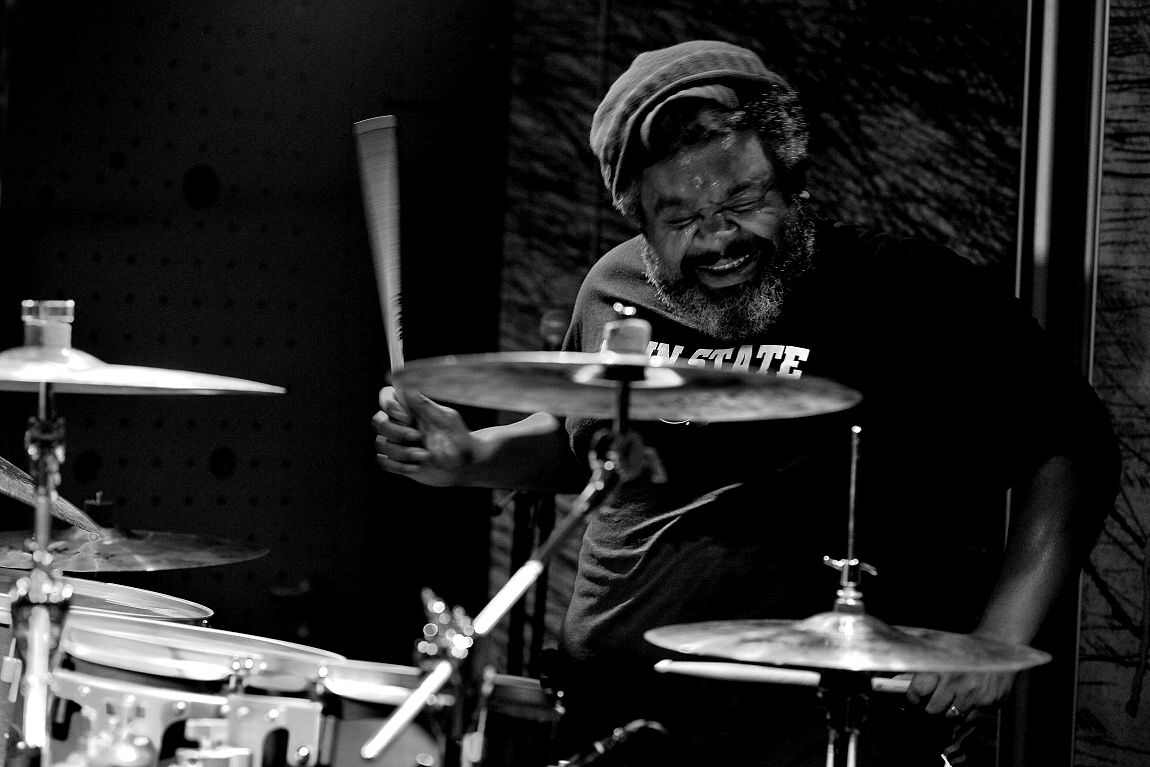