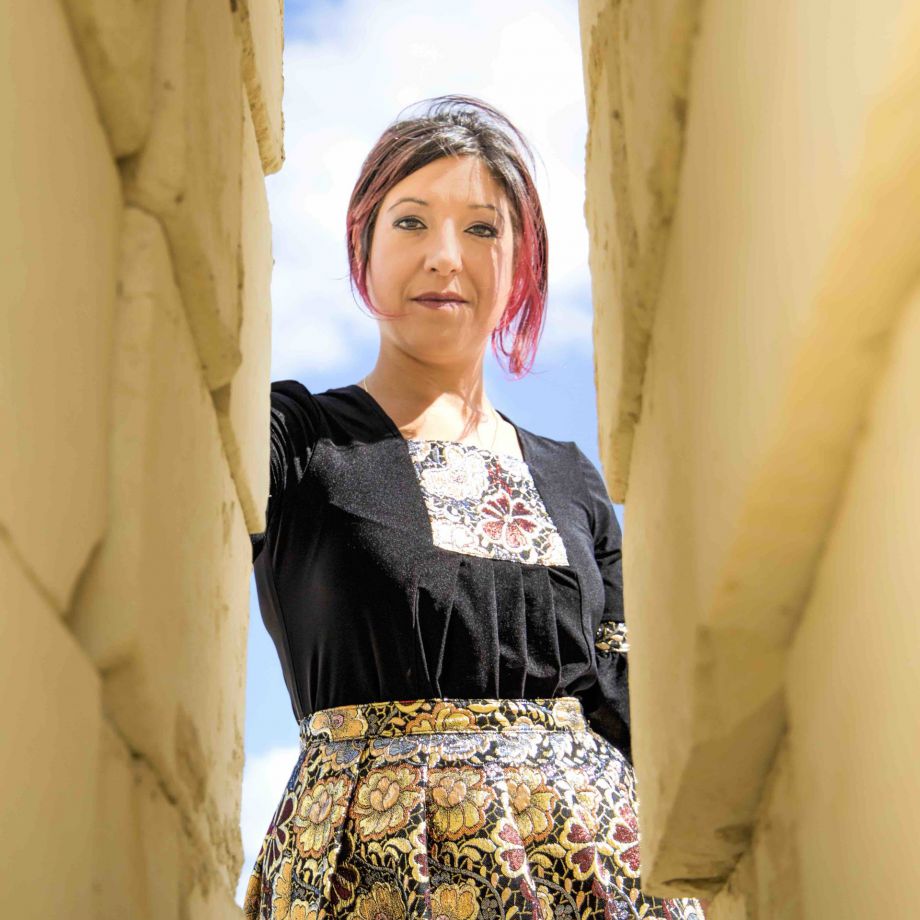 An intense and passionate reflection, from a female point of view, of the various faces of love: from the biggest love to the most desperate and very tender one, and from the type that becomes unhealthy to the one that is possessive and abusive. This is “Amoreamaro” (Bitter Love), the new album by Maria Mazzotta, one of the most emblematic musical personalities of Southern Italy. Previously with the “Canzoniere Grecanico Salentino” band, Mazzotta has gone on to become one of the most appreciated voices on the European world music scene.

biography
Maria Mazzotta’s unique versatility is what makes her one of the most important voices of the music scene in the Apulia region of Italy and, more generally, of world music towards which she has an extremely respectful approach, backed by meticulous research into vocal characteristics of the area which highly differentiate the various cultures found within it. She moves in a natural, seamless way from the sounds of Southern Italy to the inflections of balkan music, and captivates the audience with her sincere interpretation as she carries them along, immersing them into the cultures of the songs she interprets.
She started studying the piano very young (for 7 years, then the harp (for 3 years) at the “Tito Schipa” Conservatory in Lecce, and in 1998, had her first encounter with the songs of the Salento tradition through listening to the original sources and by actively participating in the revisitation and revival of these songs.
From 2000 to 2015, she was part of Canzoniere Grecanico Salentino; a band she  recorded six albums with, participating in some of the most important international world music festivals.
She attended several workshops and master-classes to deepen her awareness of various vocal techniques; with Sayeeduddin Dagar, one of the best known Indian Dhrupad singers, and with Bobby McFerrin, who chose her to do a duet with at the 2008 edition of “Bari in Jazz”.
She started looking towards the east and became passionate about balkan music and, at just 21 years old, began her musical research through various Eastern musicians of different nationalities (Greeks, Albanians, Macedonians and Croatians, Romanians, and Bulgarians and Gypsies whom she met during her numerous concerts). From here, the partnership with the albanian cellist Redi Hasa first started up, which was made complete by the merging of a musical-cultural symbiosis from which the “Hasa-Mazzotta” duo came about.
In 2006, she was part of the Notte della Taranta Orchestra directed by M° Ambrogio Sparagna. From 2011 to 2014 she was the solo voice of the same festival under the direction of M° Ludovico Einaudi, M° Goran Bregovic, and M° Giovanni Sollima.
Since 2013, she has been working as a singer with the dance company of Miguel Angel Berna, performing the shows “Mediterraneo”, “La jota e la taranta”, “Cardia” and “Dos Tierras” in various theaters around the world, including the Olympic Theater in Rome, the Petruzzelli Theater in Bari, the Canal Theater in Madrid, and at the Suzanne Dellal Centre in Tel Aviv.
In 2015, she participated as a singer in the new film by Carlos Saura “La jota”.
Maria Mazzotta can boast about numerous collaborations with national and international artists, including: Bobby McFerrin, Ibrahim Maalouf, Rita Marcotulli, Ballake Sissoko, Piers Faccini, Justin Adams and Juldeh Camara, Mannarino, Orchestra of Piazza Vittorio, Hysni (Niko) Zela and FanfaraTirana, Eva Quartet, Klapa Otok, Bojken Lako, Raiz, Roy Paci, Roberto Ottaviano, Raffaele Casarano, Bijan Chemirani, and Mario Arcari.
Over the course of her career, she has participated in the following major national and international festivals: Womad (Australia, New Zealand, UK), GlobalFest (New York), South by Southwest (Texas), Small World Music Festival (Canada), Rainforest (Malaysia), TarabTanger (Morocco), Soglie (Saudi Arabia), Womex (Greece), Babel Med Music (France, Les Suds a Arles (France), Sete Sois Sete Luas (Portugal and Spain), Karneval der Kulturen (Germany), At-tension (Germany), and Festival Mito (Milan, Italy).
press

An intense and passionate reflection, from a female point of view, of the various faces of love: from the biggest love to the most desperate and very tender one, and from the type that becomes unhealthy to the one that is possessive and abusive. This is “Amoreamaro” (Bitter Love), the new album by Maria Mazzotta, one of the most emblematic musical personalities of Southern Italy. Previously with the “Canzoniere Grecanico Salentino” band, Mazzotta has gone on to become one of the most appreciated voices on the European world music scene.

Ten tracks in all, two of which are unpublished, fearlessly pass on all the emotions that this feeling can arouse, with the songs acting as a vehicles for catharsis, consolation, strength, and as a “cure”, which is so very typical of popular tradition. They range from little ditties to traditional songs rearranged and enriched with new sounds and words, up to milestones that paved the way of great Italian songs like “Lu pisci Spada” (“The Swordfish”) by Domenico Modugno, “Tu non mi piaci più” (“I Don’t Like You Anymore”) made successful by Gabriella Ferri, and “Rosa canta e cunta” (“Rosa Sings and Recounts”) by the great Sicilian singer-songwriter Rosa Balistreri.

But the heart of the album can be found in the two unpublished works sung in the dialect of the Salento area: “Nu me lassare” (“Don’t Leave Me”), a painful ballad dedicated to love, an imploring lament to those who no longer exist; and the title track “Amoreamaro” – in the pizzica music style, which is also a dance – a rhythm traditionally played for healing the “tarantolate” (women who were supposedly bitten by a tarantula spider, which was once thought to cause a form of hysteric behavior) which ideally aims to heal a sick world.

Musically, there is virtuoso musician Vince Abbracciante leading the way on accordion and piano, with the addition of ethnic drums and percussions by the Iranian Bijan Chemirani (in “Tore Tore Tore”) and Andrea Presa on didgeridoo (in “Amoreamaro”).

The album was released on January 10th 2020 on Agualoca Records. The illustration on the cover is an exclusive work by Simone Lomartire. Graphics are by Giulio Rugge. 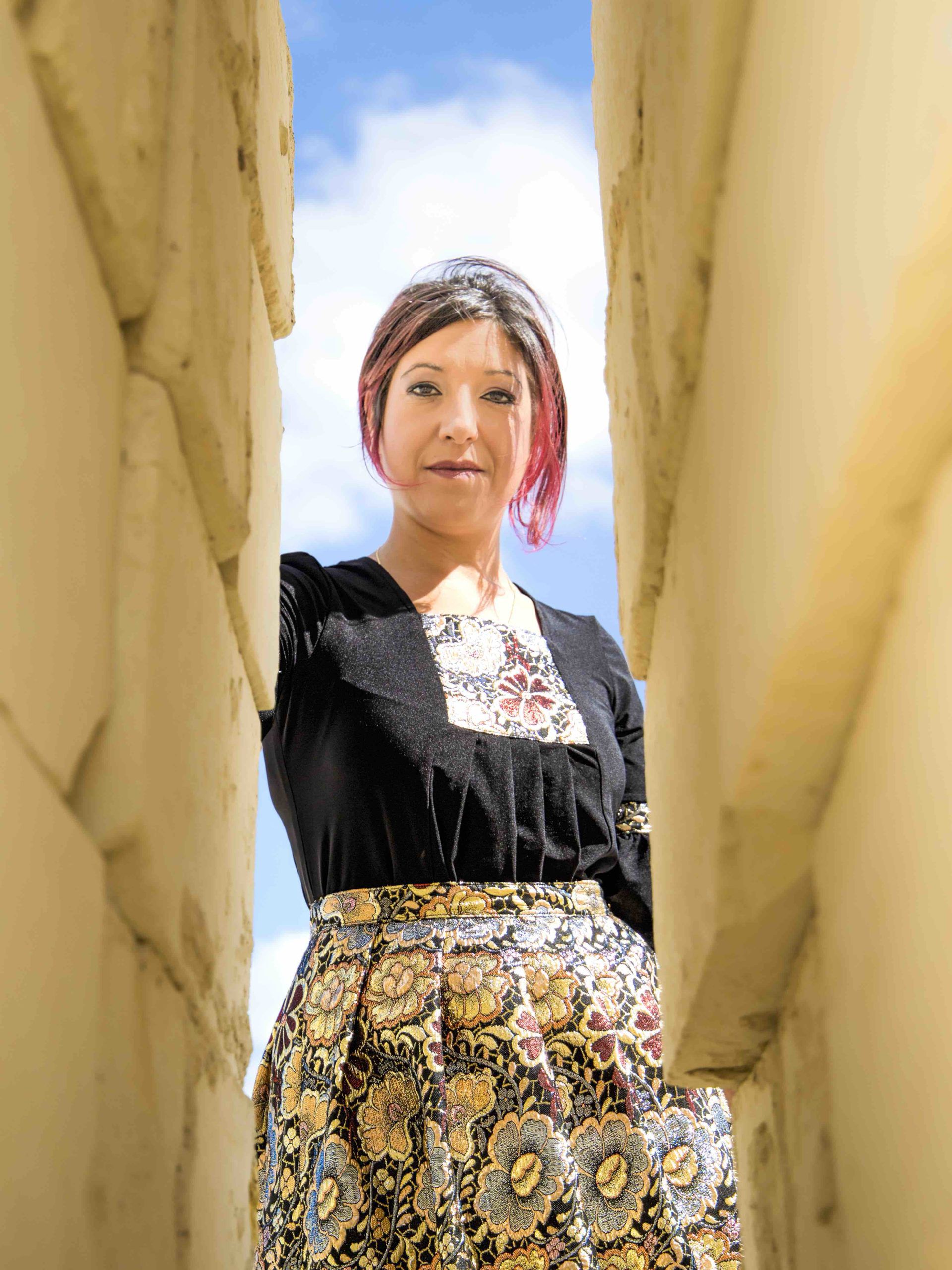 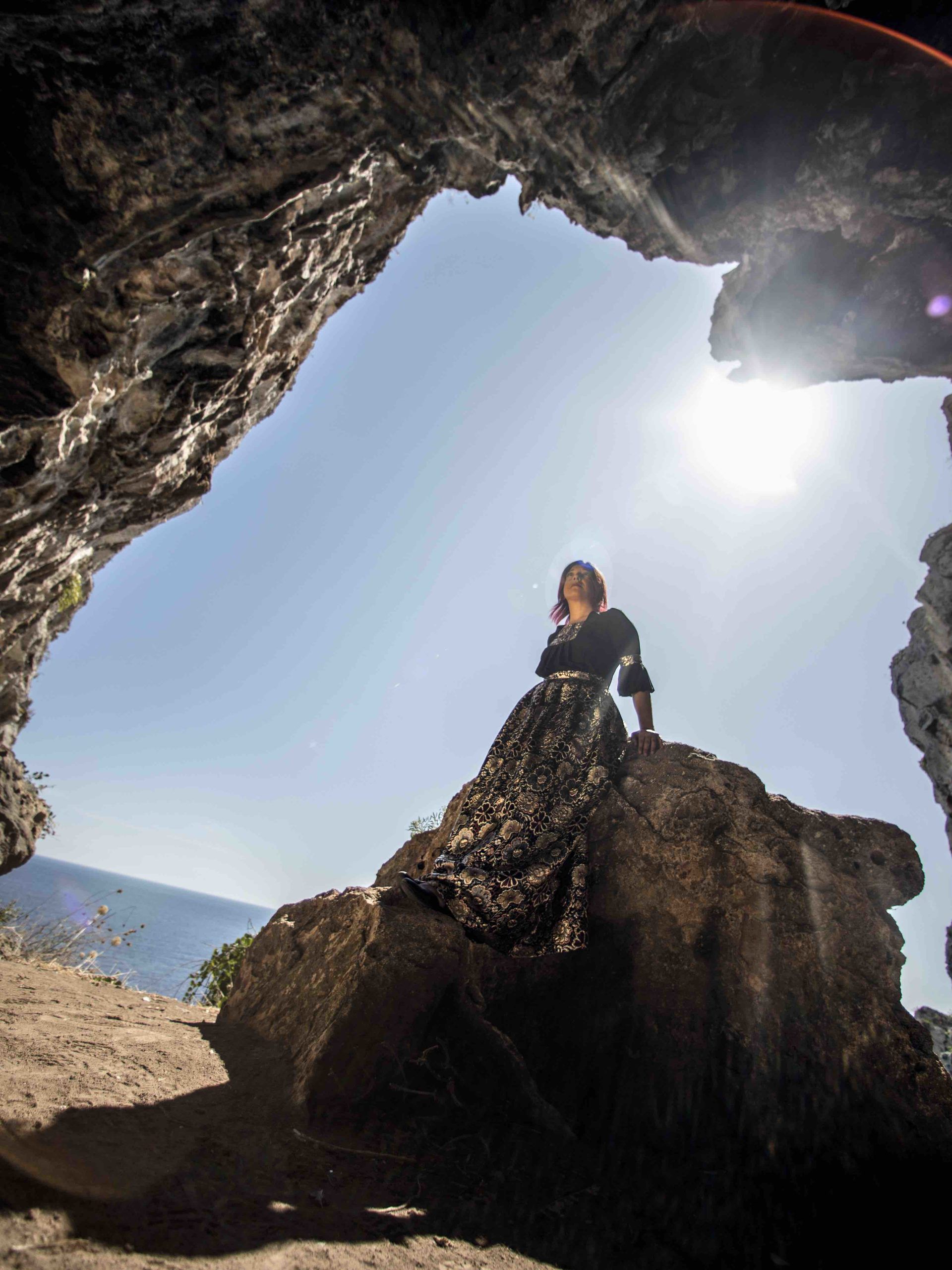 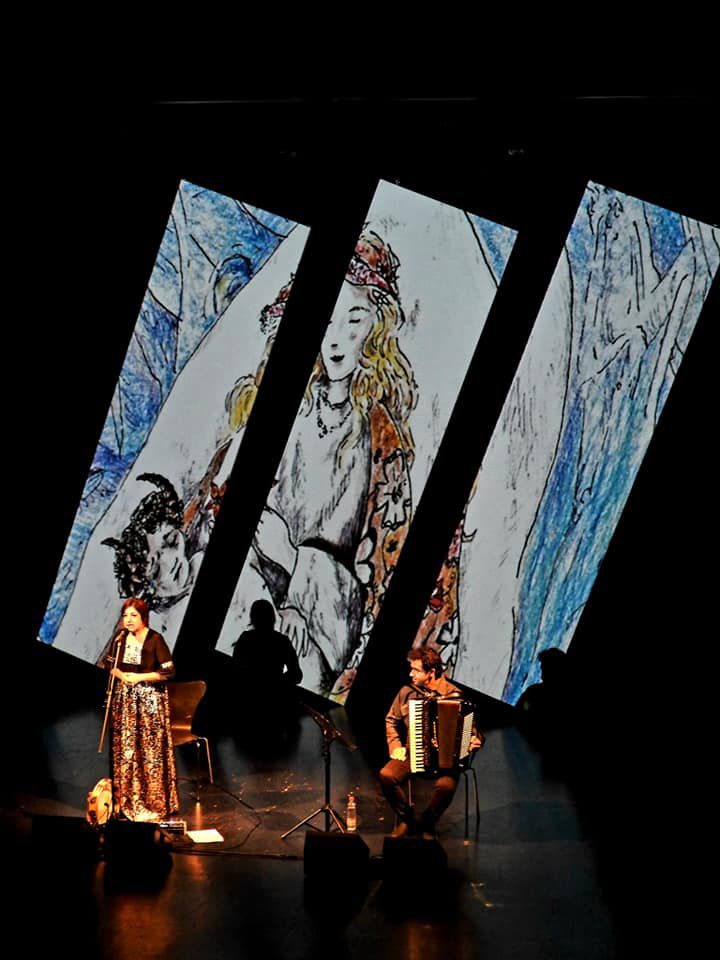 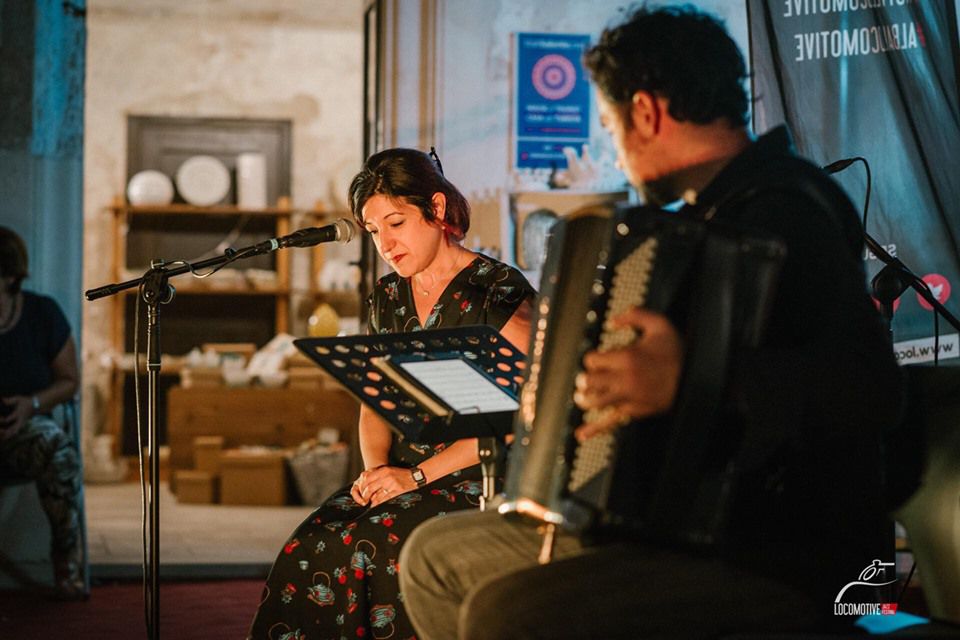 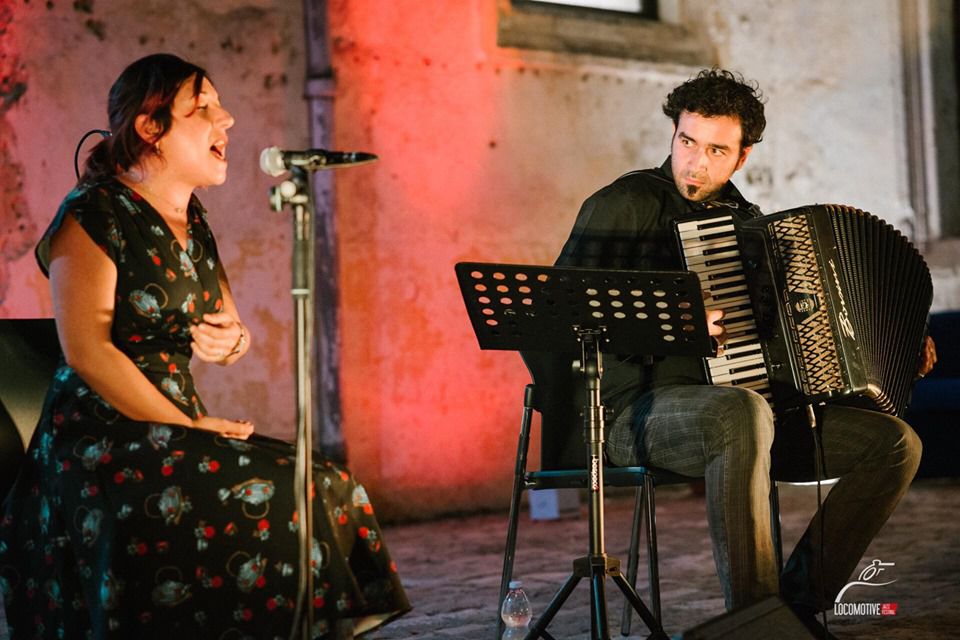 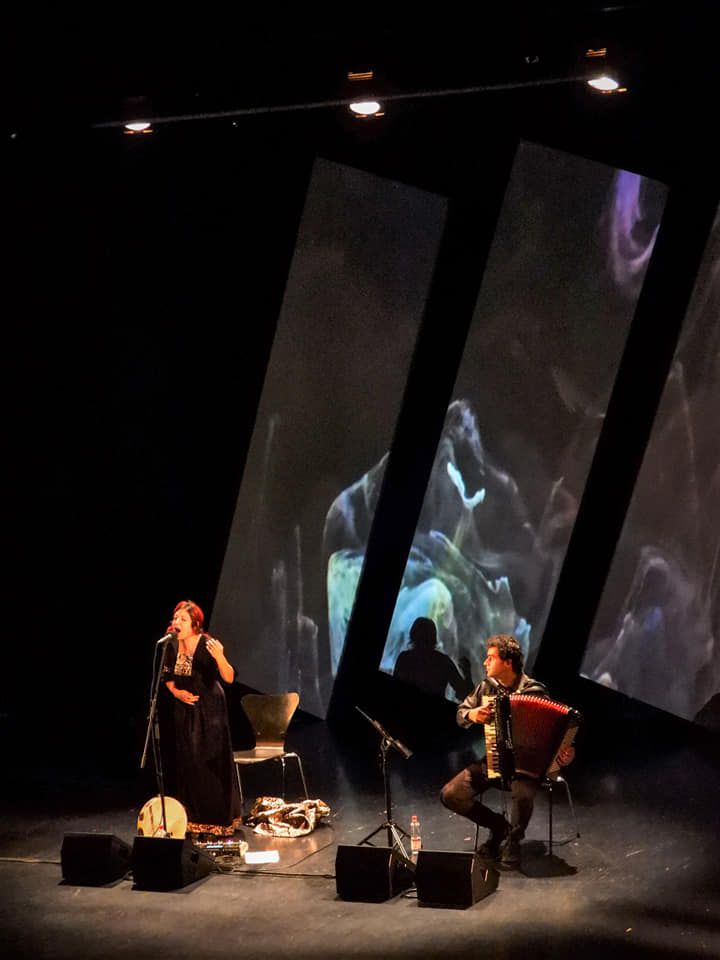 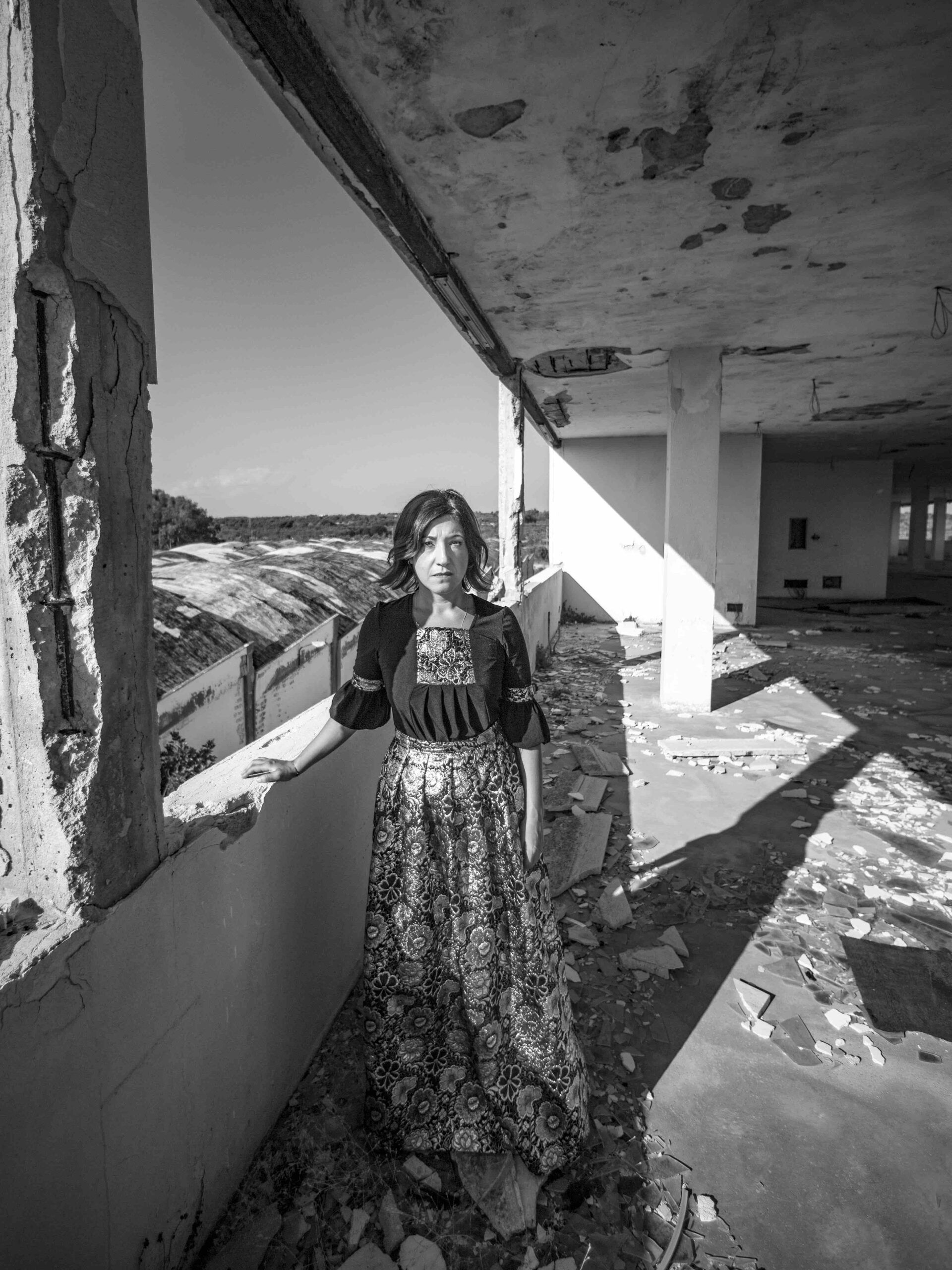 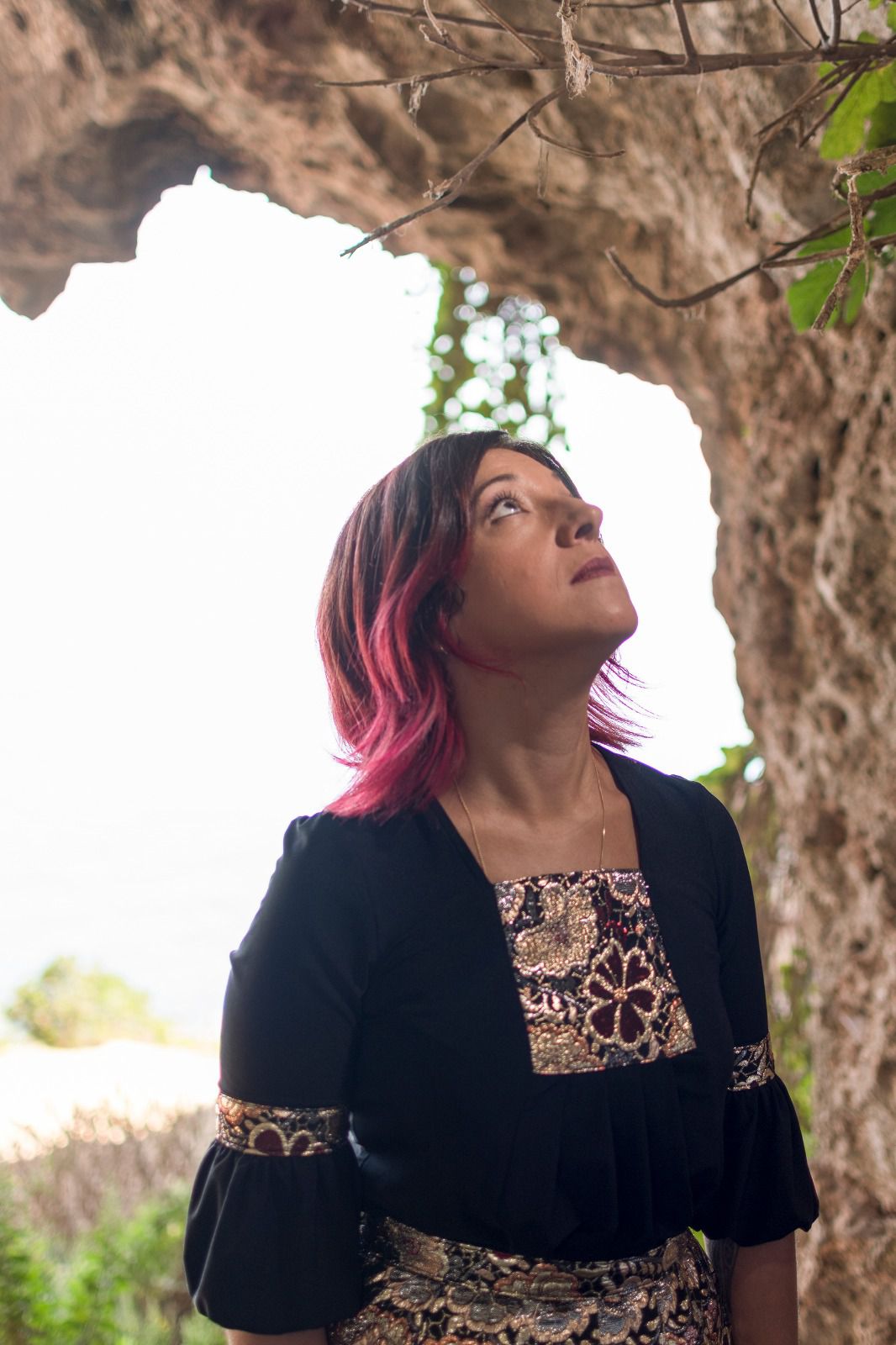 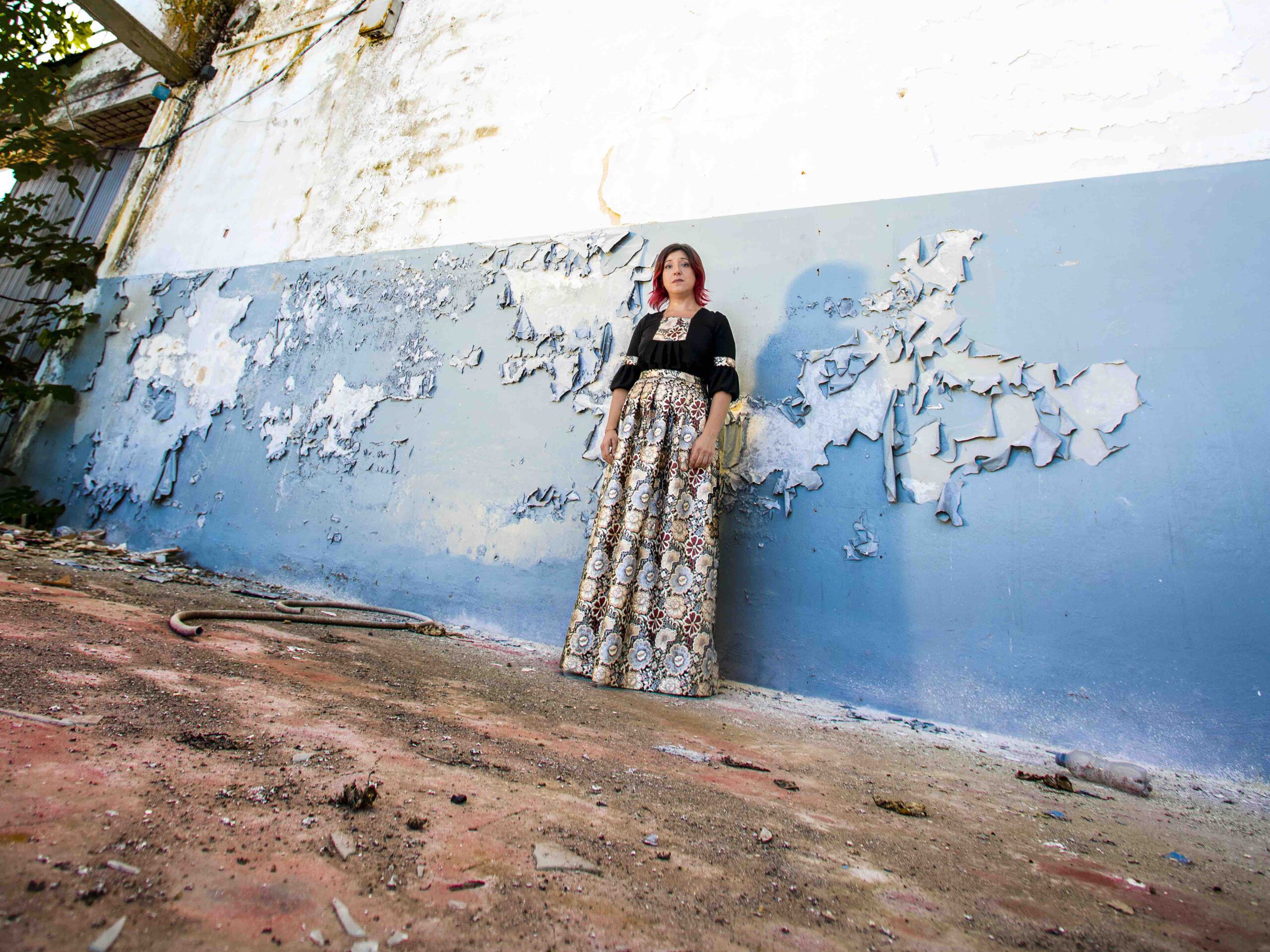 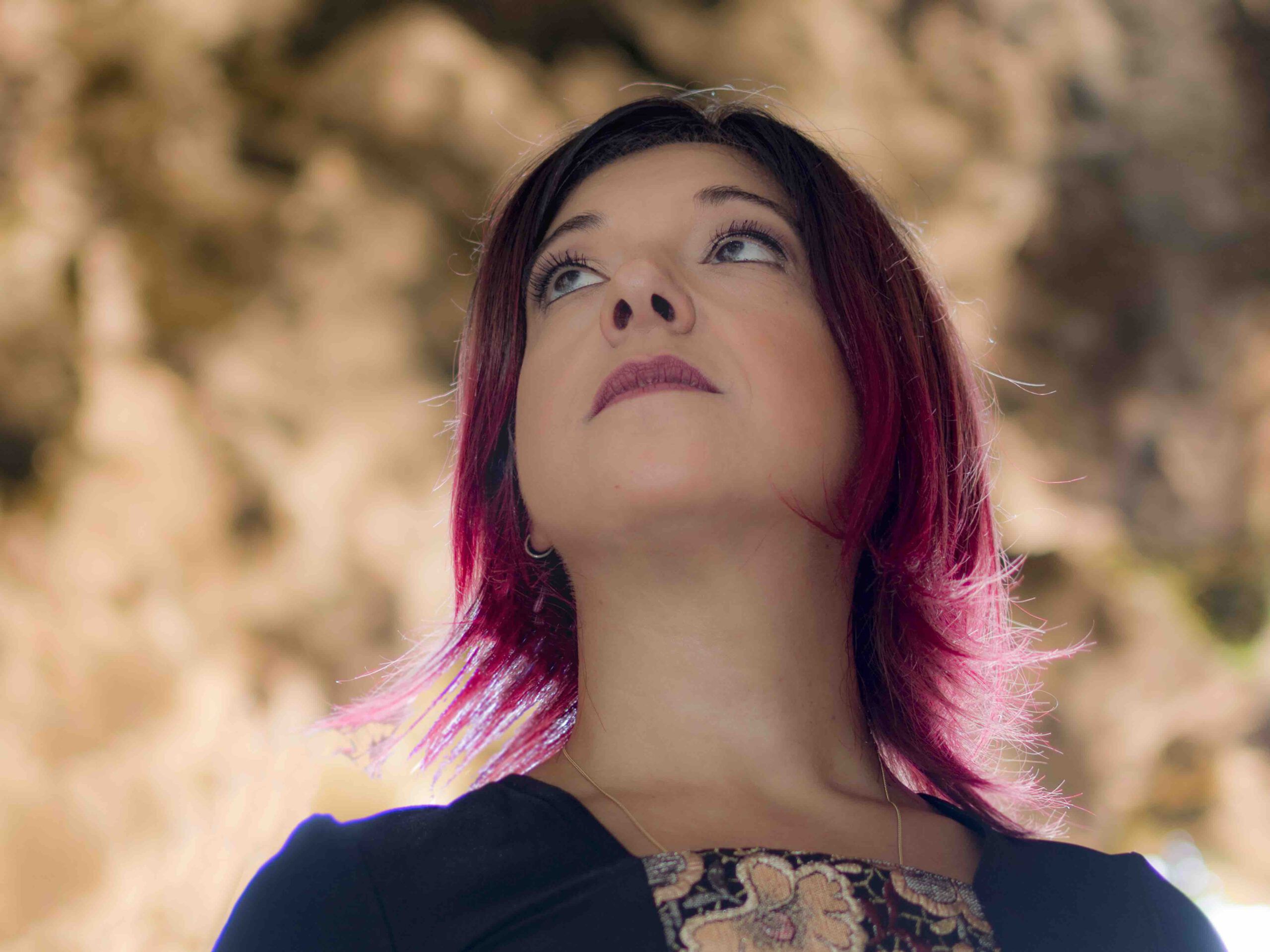 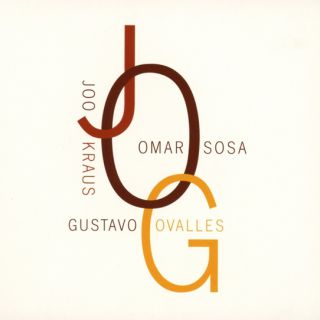 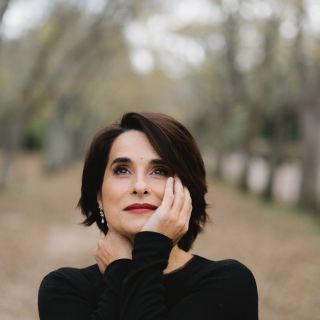 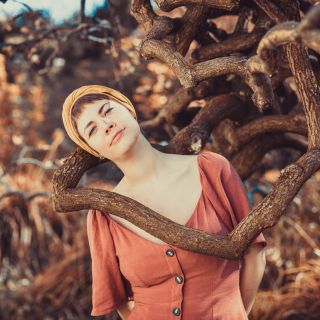