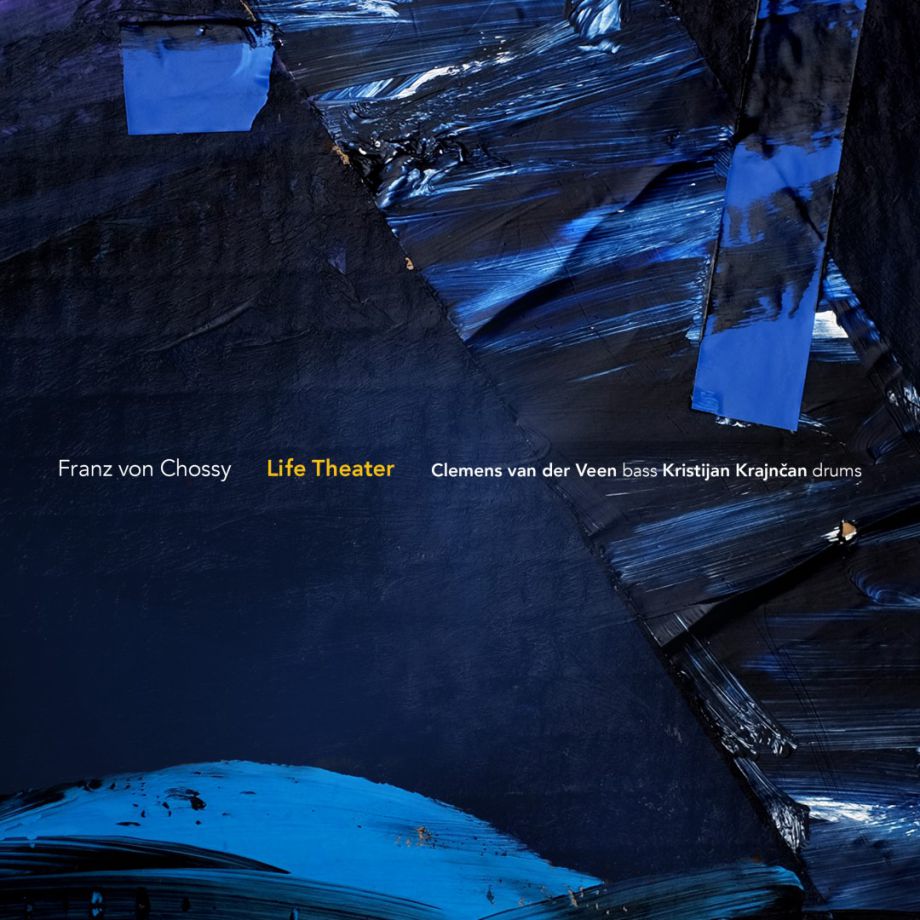 When I went to hear Franz von Chossy in 2012, his album When the World Comes Home had just been released. Without knowing what to expect, I entered this rather peculiar setting, a real cinema with amphitheater tiered seating, folding velvet chairs, and a large movie screen behind the band’s stage. Popcorn was the only movie theatre staple that was missing. When Franz’s band entered the hall as a quintet, I had to pinch myself, to realize that he had in fact moved away from his standard trio setting to a larger ensemble featuring drums violin, cello, and clarinet without double bass.

This quintet sounded like a full-fledged orchestra. Full-sounding strings and a rousing clarinet cranked stunningly enticing rhythms. The distinct lineup provided a large palette of music-dramatic possibilities. Franz emerged as a strong composer for larger ensembles, and was able to make excellent use of the richness of the various instruments. The movie theatre, in which stories are being told and illuminated, acted as the ideal backdrop.

But now the German pianist returns to his jazz base: the piano trio, with which he had previously released two albums. The trio ensemble, stripped of the stimulating wind and string instruments—does this smaller orchestration leave something to be desired, incapable of realizing Franz’s full compositional talents, which were clearly on display in the larger combo setting.?

Just after a few minutes of listening to Life Theater, it becomes clear: Franz von Chossy does not need a lot to create a full sound and to tell stories. in which every little detail is described, intensely.  On the new album, Franz manages to transfer the musical possibilities of the quintet to the trio in a clever way. More than once, you think that you are listening to a quartet, quintet, perhaps even a sextet. There are few composers who play so cleverly with sounds and are able to use the qualities of the instrumentalists, including themselves, so well. More than ever, Franz’s classical background, as well as many encounters with various musical cultures, reinforce the great effect of his music.

Life Theater is a soundtrack to life, in which the different pieces represent life phases. In this respect he is a perfectionist with a clear narrative in mind: the compositions all have a personal background, just like the chosen titles, in which the order of the entire story is important for the whole listening experience. In this story, you meet characters and discover character traits within yourself. The wealth of sounds stimulates the imagination. We begin with the peaceful playing and exploring of a child, then dark mountains and obstacles come about which have to be overcome. In other phases, there are the pleasant and nasty people that we encounter. Finally, we encounter aging and the beauty of transience. The first four compositions form the first half of life, the middle part, “The Wanderer,” is the lifeline itself, and the last four pieces represent the last part of life.

At almost every moment, perhaps in every tone, there is a certain melancholy. Franz looks for the right chords for a captivating drama. But it rarely sounds very heavy. Life Theater feels like an exhilarating journey, where you see all kinds of things and meet all kinds of people in order to return home in a cheerful and fresh way. Once in a while, during a climax with repetitive motifs, when a scene seems to end in a catastrophe, he closes with comforting notes.

Musically, the album is playful and well thought out. The irregular and compound meters sound very natural because of the spontaneous interplay of all three musicians. Drummer Kristijan Krajncan, who also provided the cello overdubs, is a master in playing with and around the beat. He senses perfectly when the music requires volume or subtlety. For more than a decade, Clemens van der Feen has been the most agile bass player in The Netherlands, profiling himself in diverse worlds, simultaneously playing intuitively and beautifully.

And Franz von Chossy has distinguished himself with his crystal clear sounds. Within both the virtuoso solos and the tiny motifs, you can discern all of his intention. In the repeating themes, the effective unison playing with the bass, and the lamentable Balkan rhythms, you imagine yourself with your eyes closed in a movie theater.