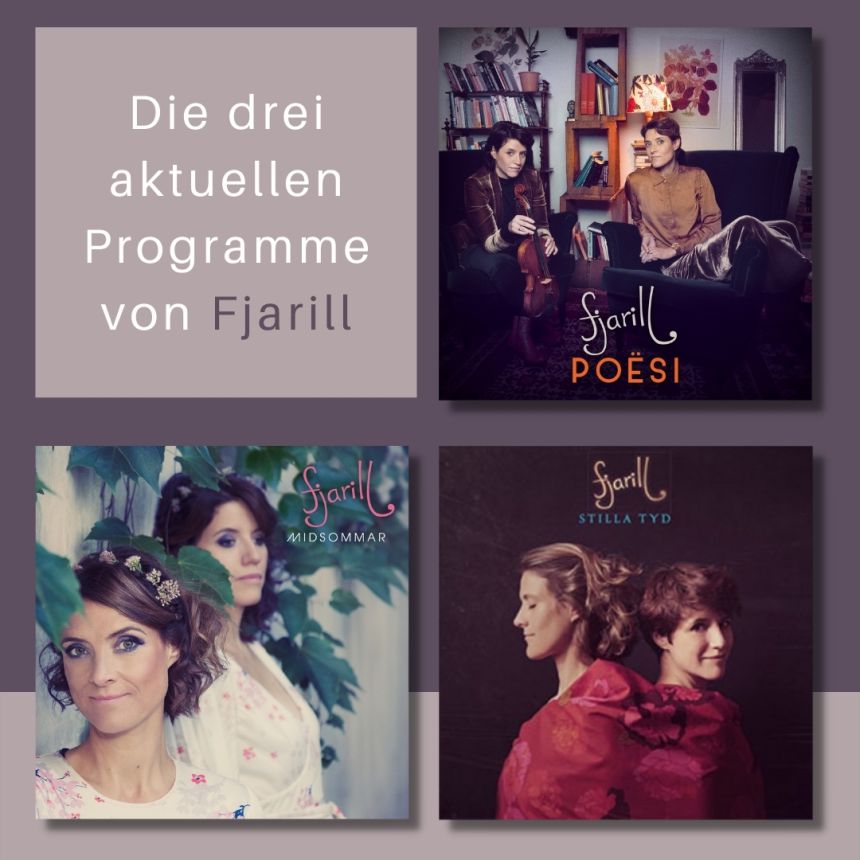 Our international duo Fjarill has successfully used the last years to create three extraordinary and touching programs – Poësi, Midsommar and Stilla Tyd – with which they are now touring.

The latest program “Poësi” is a mixture of deeply sad poetry and dreamy sounds by Aino Löwenmark and Hanmari Spiegel. The 2 musicians have uniquely set poems by Nobel Prize winners Pär Lagerqvist and Nelly Sachs to music, answering questions such as: What power does the spoken word unfold? What magic is created when we move between languages and time? And what thoughts and feelings are added when text and music combine? Both writers were born in 1891 and received the Nobel Prize for Literature in the middle of the 20th century. The Jewish Nelly Sachs lived in Berlin until 1940 before she fled from the Nazi dictatorship to Sweden, the home of Pär Lagerqvist and Aino Löwenmark. The Swedish singer and pianist Aino Löwenmark, together with the South African violinist Hanmari Spiegel, walks so artfully between then and now, until an absolutely timeless magic emerges. Poetry, that is. The program can be experienced as a single concert or in combination with short readings, held by actor Andreas Grötzinger. One thing is for sure, these texts get under your skin.

The program can be experienced as a single concert or in their new program: “Fjarill and Poësi – a program of poetry and music with actor Andreas Grötzinger”. Actor Andreas Grötzinger will recite her poems in German before Fjarill presents the originals in song form in Swedish and German. “Poems are a complex genre,” says Hanmari Spiegel. “If the audience can first understand intellectually what it’s about, the heart can open all the better afterwards.” No matter what form “Poësi” is shown in, one thing is certain, these texts get under the skin.

In spring and summer Fjarill enchant their visitors and fans with “Midsommar”. The album mixes original compositions, as well as traditional Swedish music played at the “Midsommar” festival and with cultural influences from Sweden, Africa and Germany. Already on “Midsommar” Fjarill set poems by Pär Lagerqvist to music, bringing the Swedish summer wherever they play. And if you close your eyes while listening to the music, you can see the lake “Siljan” glistening in the rising sun down in the misty valley, while the scent of freshly baked strawberry cake wafts from the house.

For the winter months, Fjarill takes us on a contemplative journey with “Stilla Tyd” towards “Huiswaarts” – Home. (“Huiswaarts” – one of the song from the album). Perhaps this is the one thought, the one fervent wish that unites all peoples celebrating Christmas, and yet the traditions of each culture at Christmas are so different. “Stilla” is Swedish for “quiet” and “Tyd” is Afrikaans for “time.”  Fjarill’s “Stilla Tyd” is not just for the peoples celebrating Christmas. It is a quiet time for everyone. On the journey we experience tender folk songs, gentle hymns for the Quiet Time and pop ballads – contemplative according to the occasion, but peppered with wit and Swedish-South African joie de vivre.

Tour period: All 3 programs are bookable all year round

Fjarill can be booked as a duo consisting of

or as a quartet with band

Poësi can be booked as a concert or in her new program: “Fjarill and Poësi – a program of poetry and music with actor Andreas Grötzinger”.