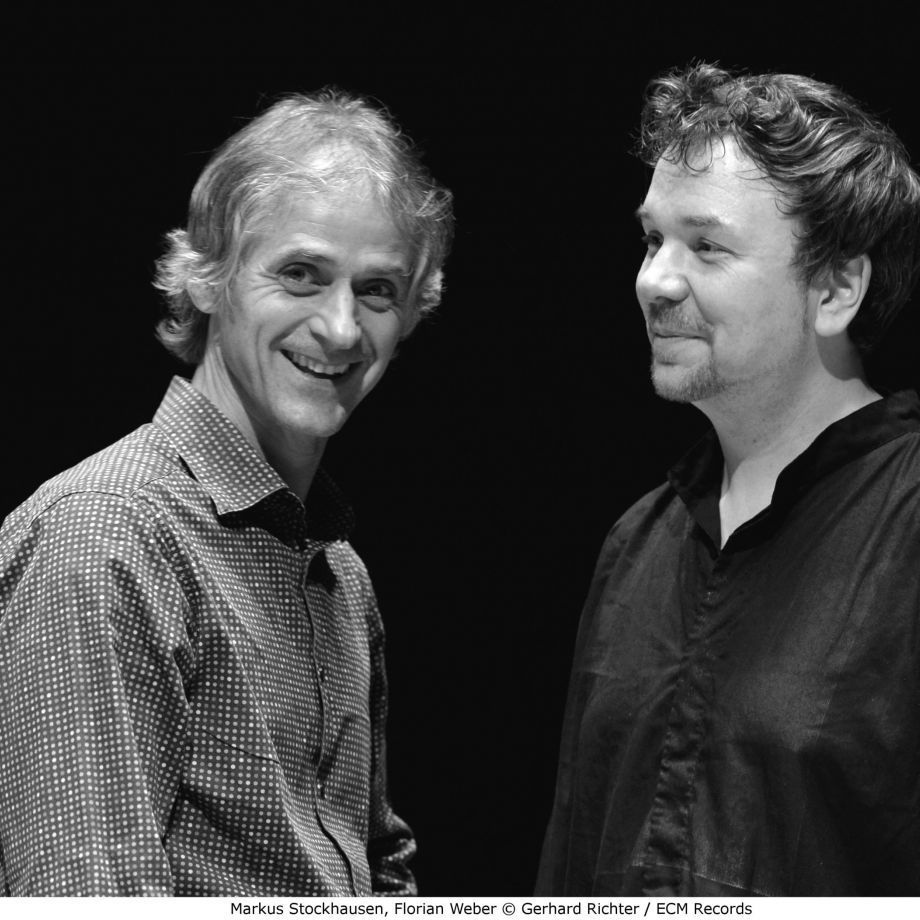 “Alba” is the premiere recording of trumpeter Markus Stockhausen’s duo with pianist Florian Weber, a formation in existence for some six years now. Though very different in their connections to the language of jazz, both musicians share a deep interest in the process of creative expression: of looking inwards and outwards with intensity at things, for echoes, resonances, insights.

In the future also bookable with Joey Baron (drums)!

“For a minute the worst is feared. Horn-piano pairings can be stark and this kicks off with the pianist Florian Weber strumming on the strings of his instrument as the trumpeter Markus Stockhausen croons abstractedly. Yet it isn’t long before the natural warmth and character of this German duo emerges. They are fine composers too, each with a knack for writing strong and inviting melodies. Mondtraum, for example, written by Stockhausen for a children’s suite, pairs his nostalgic playing with a twinkly nursery motif. On his more sombre Synergy Melody, melancholically soaring trumpet is weighted by widely spaced piano chords and arpeggios. Surfboard is ingenious: Weber submerges his theme beneath a pianistic babbling brook; Stockhausen sporadically dives in and fishes it out. Befreiung is the album’s biggest charmer; its buoyant, cyclical two-part theme winds, unspools, then relaxes into a mellow interplay beween Weber’s soulful piano and Stockhausen’s sweetly seductive trumpet. Weber’s percussive, gospel-tinged solo (with shades of Vince Guaraldi) yields a genial modal outr. It’s a fitting centerpiece to this richly nuanced, accessible collection of musical musings.” THE TIMES Online

“Strong melodies, striking harmonic flow, a variety of moods, some tracks including turns and twists, some content to say a single thing and say it well.” The Jazz Breakfast

“Stockhausen’s trumpet and flugelhorn and Weber’s piano produce some of the most beautiful sounds, often hanging suspended to catch all the facets. Thoughtful and complementary, with some exquisite playing from both.” Northern Echo

Alba is the premiere recording of trumpeter Markus Stockhausen’s duo with pianist Florian Weber, a formation in existence for some six years now. Though very different in their connections to the language of jazz, both musicians share a deep interest in the process of creative expression: of looking inwards and outwards with intensity at things, for echoes, resonances, insights.

The dramatic arc and palette of the duo’s music is wide, from the joyous melodic roll of “Befreiung” (Liberation) and refracted optimism of “Better World”, to the chill sobriety of “Die weise Zauberin” (The Wise Witch) and the intriguingly reflective cast of “Emilio” (written for Florian’s son). At times, for the listener at least, lines blur imperceptibly between composition and improvisation. In limpid settings, subtly shifting contrasts of mood and feeling mark the music.

Stockhausen and Weber developed their musical rapport inside Markus’ six-piece world music ensemble Eternal Voyage. Duo concerts followed, one in their hometown of Cologne and a mini-tour in and around Munich. At first, all the material was written by Stockhausen but as the relationship grew, Weber brought in tunes and then began writing expressly for the duo.

Initially, the duo experimented with electronic sounds, to also create the “opening sounds” that have attracted Stockhausen since he first played with Rainer Brüninghaus’s trio in the early 1980s, as on the ECM album Continuum. Stockhausen says his subsequent Aparis project, with brother Simon and drummer Jo Thönes, sought to further the Continuum experience (yielding ECM releases Aparis in 1990 and Despite the Firefighters’ Efforts, 1993). But with Weber, the realization soon came that the duo sounded stronger playing acoustically. “Florian has this incredible touch and possibilities to modulate the sound of the piano. There are so many colours available”.

On “What Can I Do For You?,” an unconventional CD opener, Weber draws the listener into an aural tapestry, strumming and drumming on the strings of the piano, a weaver’s shuttle unspooling the sound, before Markus’ plangent entry on muted flugelhorn . The tune is named in honour of the late John Taylor, Florian’s first piano teacher. “‘What can I do for you?’ was always the first question he asked when I came to a lesson, which I realized meant: ‘I don’t have anything to say, except in combination with whatever you would like to do’. And that’s how I experienced John. His genius playing with Kenny Wheeler – and Kenny also played this way – was that there is no ego. It was always about something other than themselves. Well, I have a feeling that when we play there’s no ego either.”

Two compositions on “Alba” come from recent commissions of Stockhausen: the melody of “Mondtraum” from “Olivers Abenteuer”, a song cycle for a nine-piece children’s orchestra and choir and “Synergy Melody” from an ensemble piece for otherwise improvising musicians cued by hand signals from the conductor/composer. “Zephir” was previously recorded on a more classical basis with Dutch clarinetist Tara Bouman and is largely repurposed here, to beautiful, room-filling effect.

With “Emergenzen” a complex melody based on a polyrhythm, Weber had an image of sand on a beach in his mind’s eye “with its structures and (notions of) how those structures are created”. By tiny urgencies, “by minimal fluctuations” he says, caused by the movement of wind and water. “Out of these minimal fluctuations something bigger starts to develop which then creates the structures…“

For “Resonances”, Stockhausen blew impromptu phrases into the body of the piano and the sonic results hang in the air. The album’s three short piano pieces – “Possibility I”; “Today” and “Barycenter” – were also impromptu performances.

As always, Stockhausen began the first recording session with intuitive improvisation, or “intuitive music”, the term coined in the 60s by his father, the pioneering electronics composer Karlheinz Stockhausen. “Ishta” is the glowing result. Stockhausen says he has sought to further his father’s concept of not using any kind of musical pre-agreement – not a melody, chord or scale – by removing even the word texts Stockhausen senior used around the time of From The Seven Days. “There’s no tune. Nothing. And this is sometimes when things really happen, when you become a channel of something.”

“Alba” is Markus Stockausen’s first ECM recording since “Karta” was released in 2000. Previously, he recorded Cosi Lontano… Quasi Dentro alongside Gary Peacock and appeared on Ralph Towner’s City of Eyes (both 1989). Continuum drew him widespread critical attention at 26, the album winning the 1984 German Record Critics’ Prize. For ECM New Series, he recorded his father’s “Michaels Reise”, a trumpet concerto, even if it’s not named as such, released in 1992. 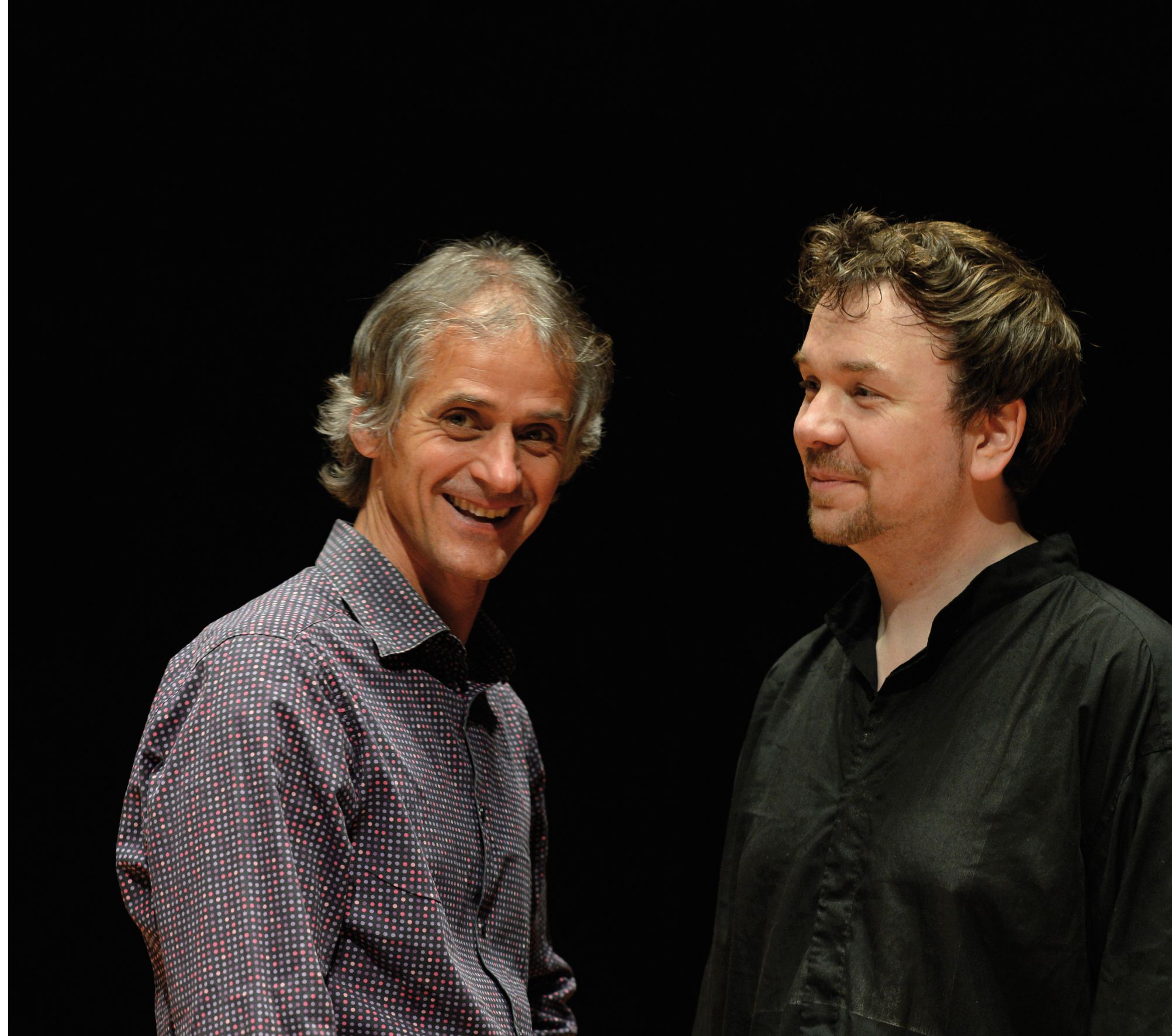 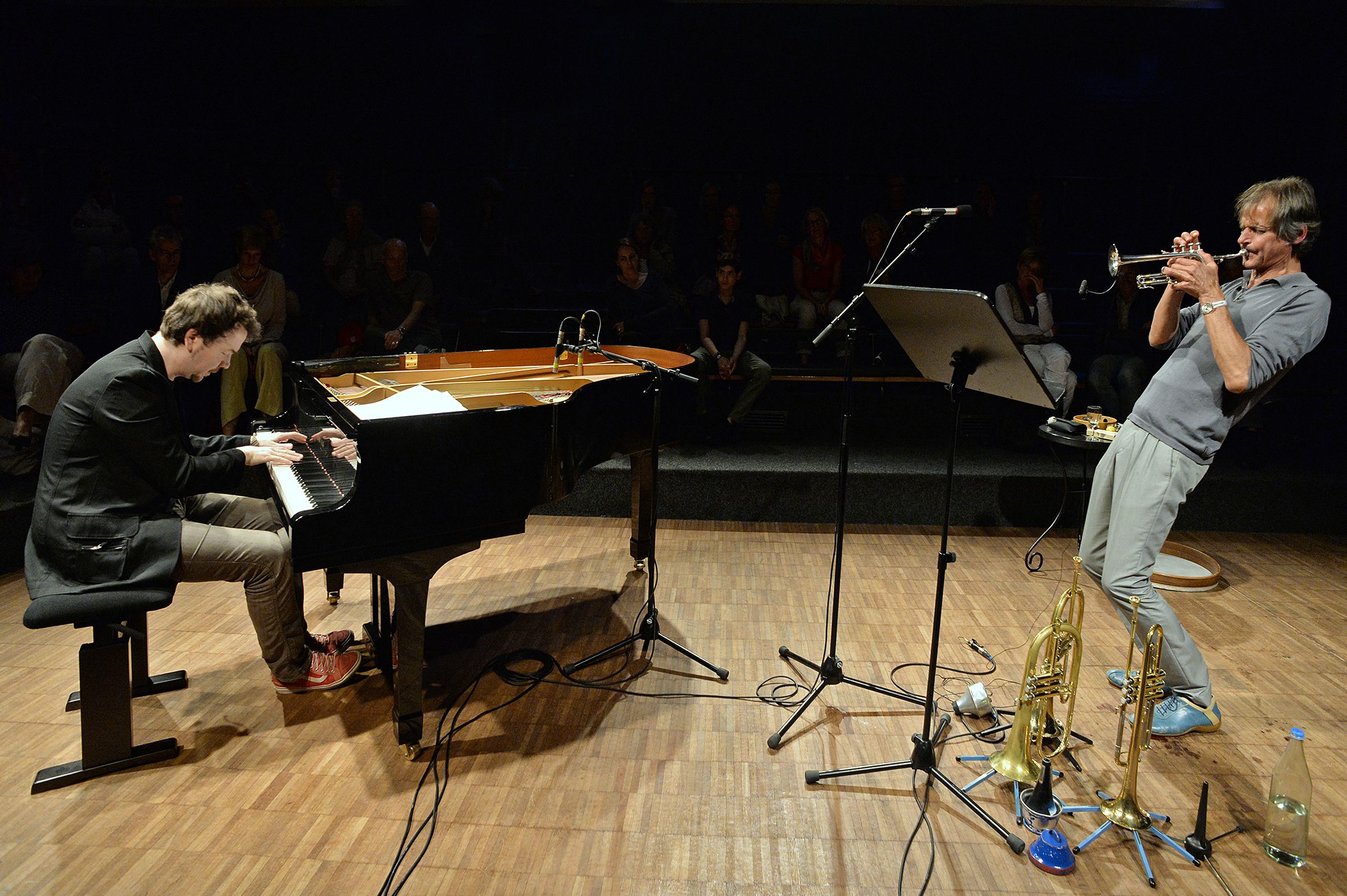 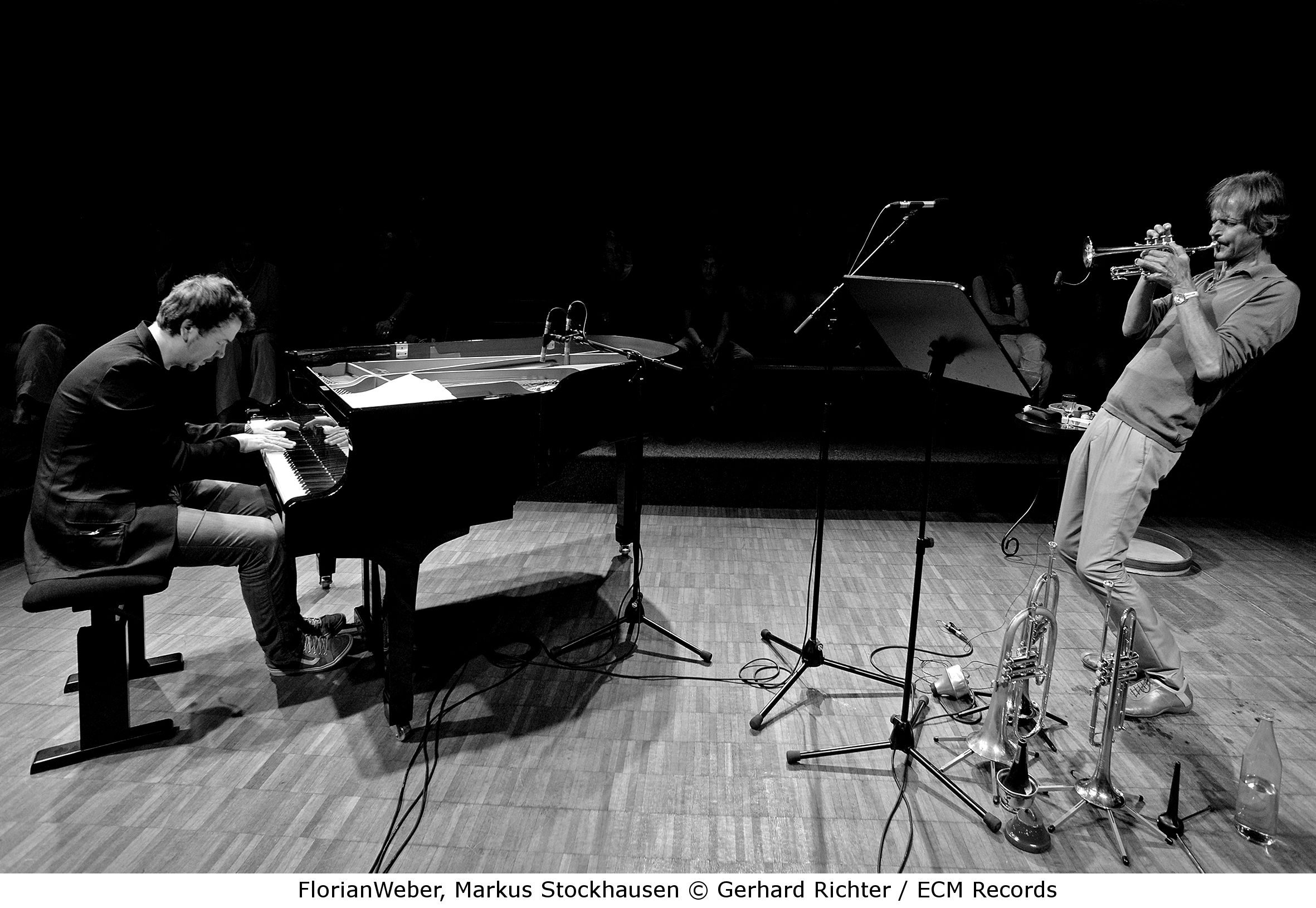 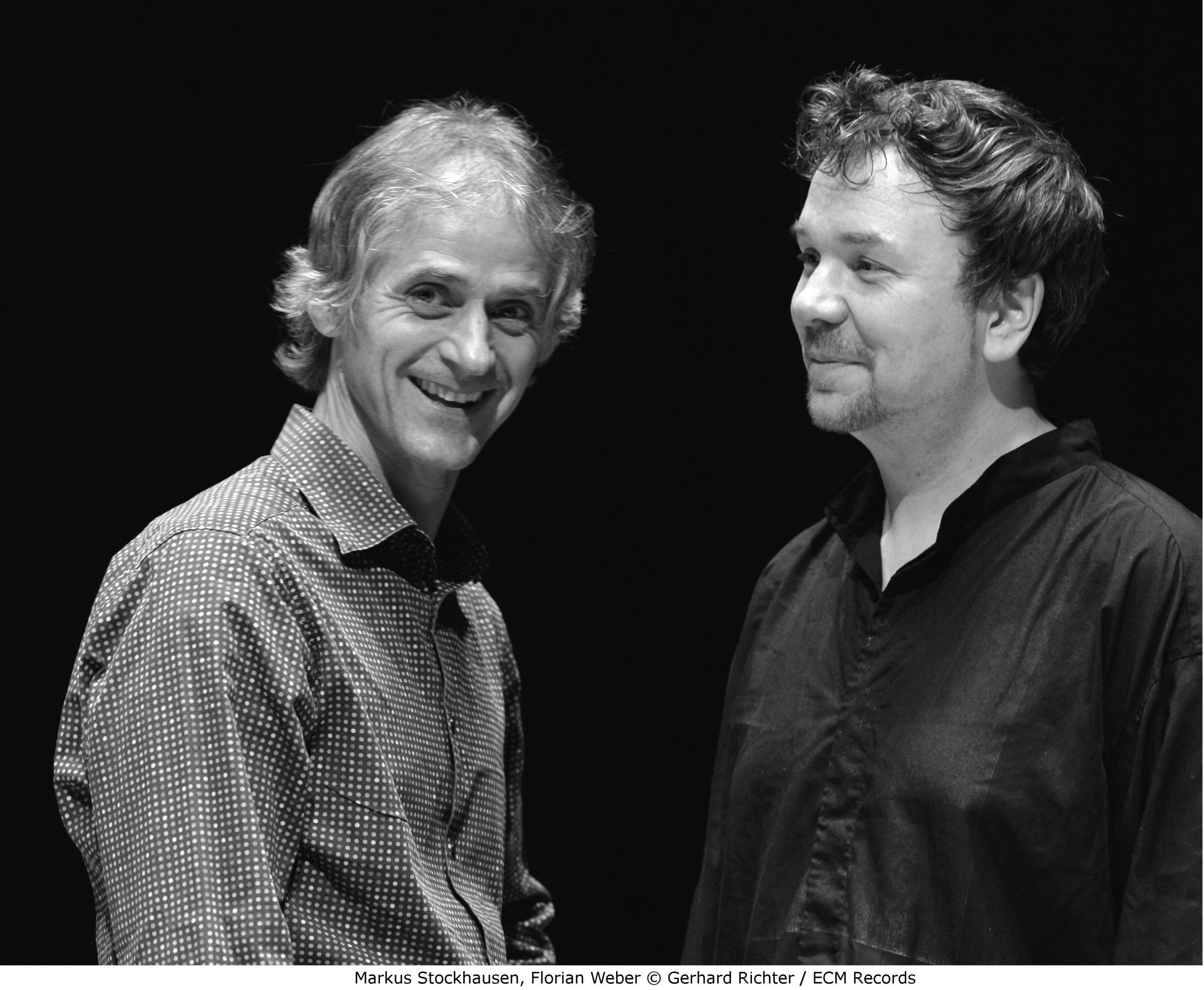 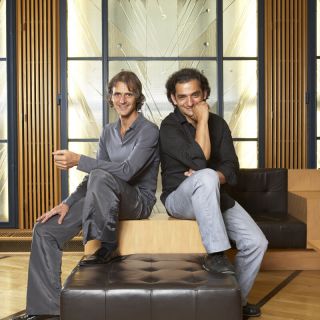 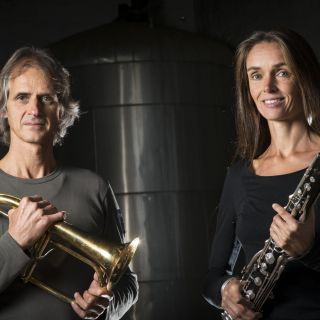 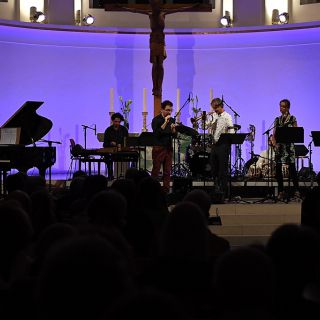 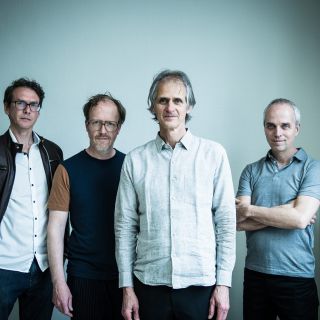 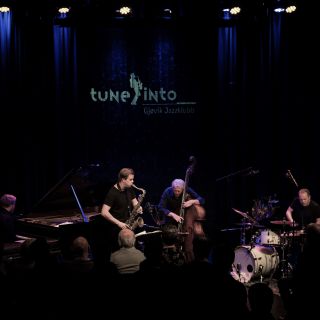 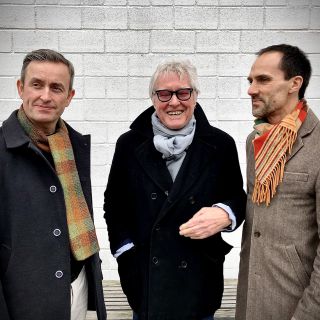 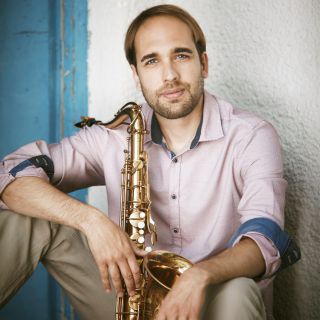